Behind the curtain with a Conant Theatre student director 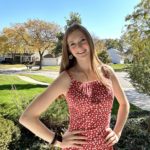 Every year, Conant Theatre puts on three major productions: the fall musical, the winter play, and the spring play. For each show, dozens of actors take the stage and perform their hearts out. For most people, they only see the lights, music, and acting. But, in reality, it takes a lot of hard work from a multitude of people hidden behind the curtain to make a production happen. One of the key people who helps the cast and crew become the best version of themselves is the student director. For this year’s fall musical, “Anastasia,” this key player was Olivia (Liv) Ward, ‘24.

Ward’s love for theatre was instilled in her at a young age. She frequented theaters in Chicago, where she saw the magic of theatre take life on a professional stage. “[It] was a big door opener for me as to what I wanted to do in high school,” Ward said.

Before coming to Conant, Ward had acted in just a few productions because most of her time was consumed by gymnastics. Despite this, she still found time for voice and dance lessons, which allowed her to stay connected to her developing passion. Once she came to Conant, Ward jumped straight into theatre.

Although her freshman year took place over Zoom, she still managed to get involved with all three major productions. Each of these productions gave Ward new insight into what it meant to be a part of Conant Theatre. By acting in both a play and musical, she was able to discover the small differences between each type of production.

“I feel like there are more components to a musical than a play,” Ward said. “I wanted to challenge myself.” This pushed Ward to direct her first musical last year. One of her largest inspirations to go for this challenge was her fellow peer and student director of Conant’s 2021 production of “Midsomer,” Johanna Selmeczy, ’22.

“Seeing Johanna thrive in this role was something that made me want to [become a student director],” Ward said. After a few conversations, Selmeczy convinced Ward to pursue the role of student director her sophomore year, and Ward became the student director for the fall musical that year, “The 25th Annual Putnam County Spelling Bee.” Ward is very grateful that she was encouraged to pursue this opportunity, but she quickly learned that the job is not for the faint of heart.

“You have to be stubborn and willing to stand up for and push for what you believe in,” Ward said. “It’s really all about determination.”

From casting to set pieces to lighting cues, a student director must have a vision in mind that they are willing to fight for. In every way, shape, and form, a student director is a leader. They need to be someone that the entire cast can look up to and take instruction from. From the two shows Ward has student directed, she said that she has gained decision-making skills and a greater understanding of what goes into putting on a show.

“When you act, you [have a] one sided [view] of, ‘I have to know my lines, I have to know my blocking,’” Ward said. As a student director, Ward was able to see behind the curtain, also conducting the work of the crew backstage. Instead of solely having to focus on memorizing lines, blocking, choreography, and music, a student director becomes very aware of the crew roles and all of the effort that goes into what they do.

But the best part of the job, according to Ward, is the pride she feels when she looks around at the cast and crew right before the first show on opening night.

“It’s just the pride you feel in yourself in the end, that no matter how many days were bad or how many nights you thought you didn’t want to do it any more or thought you couldn’t. It paid off.” Never is this gratification made clearer than when Ward gives her speech on opening night. As she begins to speak, she looks around and sees the love that each individual cast and crew member has put into the show.

“It’s not like any other feeling I’ve ever felt before,” Ward said. “It’s really really magical to see your cast come together to put on a show that you have worked on for several months.”

On the opening night of “Anastasia,” Ward felt this pride again. “Anastasia” is a show about family, friends, and discovering one’s self. But what makes it so special is that it is a show made for all people. “Through these insane characters, there is something that each person can kind of relate to, whether that’s having something in your past that you may carry with you to this day, or if you’re not sure who you are yet. That’s okay you’ll figure it out [and] you’ll meet people along the way who will help you, and you help them [in return].”

In a way, “Anastasia” is a lot like show theatre as a whole; it is for everyone. No matter someone’s artistic inclination, they will find something that they will love. That may be pit, art, costumes, construction, lights, sound, cast, or anything in between. Theatre creates a family, and a student director helps to ensure that the family is the best version they can be. Being a student director requires a lot of hard work, but it is all worth it for the end product: a truly magical show.