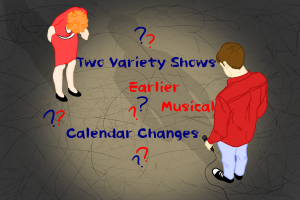 The two-night variety show is Thursday, Sept. 15 and Friday, Sept. 16, two months earlier than previous years. Moving the variety show before the musical is one part of a larger shift in the schedule of all the drama events at Conant.

An additional night of performances has been added. On Thursday’s show, called “Our Voice,” singers will perform two songs each as part of a vocal competition where the audience can vote to determine the winner. On Friday, all other types of acts will perform in a show called “We’ve Got Talent.” Some acts include Poms and Drum Line.

Variety Show and Winter Play Director Scott Altergott stated that this change “creates availability for new talent and types of acts” rather than being dominated by singers as in previous years.

The timeline has been changed for all other productions, too. The musical is being moved up to Nov. 3-5, while it was previously in February; the comedy play will now take place Jan. 27-28 instead of in spring, while the dramatic play will now be March 3-4 instead of in December.

Musical Co-Director and Spring Play Director Katherine Apperson added that having the musical first will encourage “a lot of underclassmen to get involved” due to the large number of available roles.

Drama Assistant Joseph Tullo noticed that the “incoming group is larger than previous years” and has an “open mindset” towards the changes.

Assistant Principal Robert Small explained that all productions, including musical, variety show, the two plays, drama club, and improv productions, are now “part of one big family” called Conant Theater. The change is to allow for more collaboration between the productions and allow for more students to experience some type of theatrical experience.

Musical Co-Director Timothy Koll explained that the new school calendar also necessitated change. The system had not been changed before because “the old system wasn’t broken, so why fix it?” Koll added that the schedule was chosen due to the limited possibilities to fit major productions during the school year.

Drama Assistant Shayna Adelman said that the changes came as part of the vision of the new drama leadership after Marty Goughnour retired as the drama director in June.

Students had mixed reactions to the changes, with some struggling to balance conflicts with other sports or activities. Natalie Urban, ‘18, said she was “not a fan” of the drama schedule change because she felt that there would be less of an overlap of extracurricular activities in the winter than in the fall.

Krisha Jivani, ‘20, said she “wanted to be a part of cross country” but was unable to after she got involved in the musical.

Gabby Freiberg, ‘19, fully supported the change, explaining that there “are many advantages to the new setup” like how she will now have “more time to focus on finals at the end of the semester.”

The directors encourage people to be open to the changes. However, Altergott added that this schedule is an “experiment for the year” and that “no final decisions for next year will be made until after the spring play.”