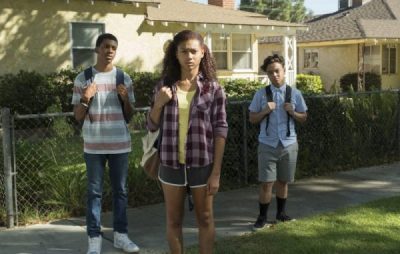 High school is an exciting time, but it can come with some harsh realities. For teens in the inner city of Southern Los Angeles, this goes beyond drama and academic stressors; they must navigate their way through violence, familial issues, and sudden lifestyle changes. Netflix’s latest original series,  “On My Block,” is a coming of age show that provides a new perspective on the life of inner city high schoolers.

The series opens on four teens, Monse, Caesar, Ruby, and Jamal, as they longingly watch the vibrancy and energy of a high school party. While a bit over-exaggerated, the kids find a sense of urgency and anticipation among the chaos of the scene. The loud music, dancing, and seamless freedom of the party reflect the feelings of the group as they watch from the sidelines. As soon-to-be freshmen, they have racing thoughts about how their lives will change in the months to come and have established that maintaining their friendship is essential for their survival in high school.

However, the dynamic of their “fam” is continuously threatened by outside influences despite their attempts at keeping things together. Rumors arise, romance grows, and tension inevitably builds; in a blend of drama and comedy, the group struggles to prioritize the changes in their life.

The show has a diverse cast and does a commendable job of bringing people of color into the spotlight. Monse (Sierra Capri) is a strong, sarcastic young women and does not take criticism from anyone. Caesar (Diego Tinoco), Monse’s love interest, is forced into gang relations as a result of his family history and often finds himself in dangerous situations. Ruby (Jason Genoa) acts as the mother of the group; he is quick witted, logical, and compassionate. The last of the group is Jamal (Brett Gray), a jovial yet paranoid boy who is obsessed with uncovering a plot of money rumored to have been buried in the neighborhood. The character development is well planned as each character learns to use their differences to resolve conflicts and take on a definite role in the friend group. Some characters have exaggerated traits of compulsivity and obsession, but it ultimately helps to maintain the humor of the show.

While the series may stand for racial diversity, it has recently received backlash for its casting of Ronni Hawk as Olivia, a Latina girl who moves in with Ruby while she struggles with the deportation of her parents. Not only does Hawk fail to match the ethnicity of her character, but tweets have recently resurfaced which depict the actress as pro-Trump. It is upsetting that the series could not have cast a Mexican actress to accurately portray the role, and hypocritical considering the situation that Olivia’s parents are in. The character had the potential to be more authentic and properly translate the impact of the challenges she faced. Although seemingly minor, the difference is disrespectful, as the Hispanic culture is not receiving proper representation. While the casting flaw contradicts the themes of racial diversity, it does not disrupt the plot line and its focus on people of color.

The inner-city setting of the series provides an interesting twist to plot development. In addition to typical high school drama, the series discusses issues such as gang violence and social status to provide a new perspective on the life of children in lower-class neighborhoods. The teens seem to have become accustomed to encounters with gang members, as well as to safety threats around their home. It’s eye opening to see how characters interact with their environment and manage to stay calm in threatening situations. The show demonstrates the dramatic difference between inner-city life and that of the suburbs, as many viewers must not have to worry about encountering violence on the way to school or confrontation with a gang leader. The perspective creates a sense of respect for people in these situations.

The series continues its social themes in its discussion of the objectification of women. As freshmen in high school, Monse and Olivia must deal with undesirable comments about their appearance from men on the street and express frustration with the situation. They discuss the lack of value for women among their generation, and feel as though women are much too commonly objectified and underestimated. The show delivers these themes in a seamless manner, as Monse and Olivia contemplate whether attending homecoming is really all that it’s made out to be.

The fast-paced nature of the show makes it easy for viewers to quickly become attached to their favorite characters and empathize with their situations. The quirks and insecurities of each character come across very well, allowing for viewers to connect with the show. The actors have a strong range of emotional expression and their feelings appear genuine. It is easy for viewers to become emotionally invested in the show and to feel frustration while watching, as things do not turn out how they should for some characters.

The series does a good job of carrying a variety of tones and is able to smoothly transition from humor to frustration. Comedic quips from characters, especially Jamal and Ruby, throughout each episode provide the lightheartedness and necessary sarcasm to keep liveliness within the show. For some, the cringe-worthy, awkward high school experiences are all but too relatable and can help viewers develop a further connection with characters.

The series is considerably binge-worthy, having only 10 episodes at approximately 27 minutes each in its first season. Netflix has confirmed the show will run for a second season, which will be a relief to fans after watching a high-stakes season finale. “On My Block” is a great watch for anyone interested in a high school drama that goes beyond stereotypes, and provides a new perspective on inner-city life.