Quality education should be US Department of Education’s top priority 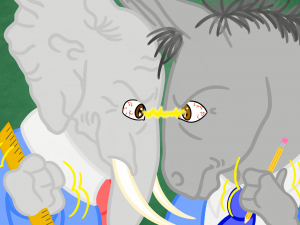 Nelson Mandela famously said, “Education is the most powerful weapon which you can use to change the world.” Quality public education is not only a powerful tool used to shape the minds of today’s youth but also a valuable tenet of American society. With President Donald Trump’s recent appointment of Betsy DeVos as U.S. Secretary of Education, many politicians from both parties have called into question the future of public education.

The Crier believes that the U.S. Department of Education’s ultimate priority should be to create conditions that provide quality public education to all, regardless of financial status.

After a tie-breaking vote by Vice President Mike Pence, Betsy DeVos was appointed United States Secretary of Education. How did someone who lacks basic knowledge of public education and experience in politics gain one of the most powerful positions in the American education system? The answer, it unfortunately turns out, is because senators couldn’t afford to vote no.

The DeVos family has contributed approximately 200 million dollars—and Betsy DeVos has personally contributed 2.5 million dollars—to the Republican party and its candidates. With the upcoming 2018 senate elections, many senators presumably could not risk millions of dollars in campaign funding from the DeVos family and instead, ignored the wishes and wellbeing of their constituency.

The future of American education shouldn’t be jeopardized by financial politicking.

When politics begin to undermine the qualifications of top government positions in education, the potential for enforcement and improvement also goes down. For example, without thoroughly understanding laws like the Every Student Succeeds Act (ESSA), meant to provide educational grants for low income students, one can not make correct decisions regarding how to enforce or amend such laws. Because so many students rely on ESSA and other related legislation, lack of proper enforcement or changes made to ESSA would have an enormous impact on students. It is, therefore, imperative for the educational administration in the government to be qualified. Money politics should not have a bearing on the futures of American children.

Although DeVos is a proponent of charter schools and aims to cut Title 1 funding, which provides financial assistance to schools with a high percentage of low income students, it is important for the government to recognize the importance of public schools for Americans, especially the lower class. Not everyone can afford privatized education. Rather than separating wealthy students from poor ones and increasing the educational income disparity, the Department of Education should strive to improve public schooling for everyone through increased funding, collaboration with state and local education systems, and continual research of better educational techniques and programs.

Creating conditions to provide quality education to all students should be an utmost priority of the Department of Education. Education is the very foundation of the next generation. It equips students to be future leaders and improve the society we live in. Every child, regardless of socioeconomic status, should be given the opportunity to reach their academic potential.

It is the Department of Education’s duty to make sure that sufficient amounts of funding are distributed to low income students and schools in urban areas. Lack of resources can inhibit learning for capable students. For example, a student in a low income school taking a computer science course can’t fully immerse themselves in learning without access to computers and appropriate software programs. This lack of resources sets talented students in urban and rural settings behind their wealthier counterparts. The effects transcend to the job market because low income students aren’t able to cultivate their skill sets in their K-12 education and are less appealing to colleges and eventually employers. However, by providing funding to pay for resources such as computers, the Department of Education can help mitigate the effects of the educational disparity.

Our progress as a nation is contingent upon our progress in education. The school-aged children of today are the leaders of tomorrow. The Crier believes that qualified academic leadership and a quality education system for all students regardless of financial status is imperative in the U.S. to shape the American youth.