Inside – a dark indie video game 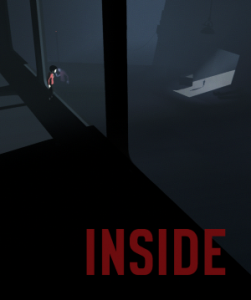 Cover art for the video game "Inside," created by Playdead and published in 2016.

It is dark—nearly pitch black—and you are running through a forest in the rain. You are young; you are scared, but you know you have to keep going. This is how “Inside” starts.

“Inside” is a sci-fi puzzle game for PC from indie developer Playdead. It is also a psychological thriller. The game is currently available on Steam for $20, and can last about two or three hours, depending on how quickly you play. The price-to-length ratio is on the high end, but the unique design of “Inside” makes it well worth the price for those seeking a dark and interesting experience.

The silent protagonist is a young boy constantly on the move, heading towards a destination while escaping from men with flashlights and the gaunt dogs they lead. As you progress, you discover many dark experiments the scientists of the world have undertaken–mainly on human beings.

The gameplay revolves around puzzles and progressing through several buildings and areas. The main goal of the game is to keep moving, and the game encourages that by dangling intriguing plot elements in front of you. There are a wide variety of puzzles, each with the purpose of moving you forward. One common puzzle involves a block filled with pressurized air. Pulling a cord on the block releases the air, and sends the block upward to reach higher places or to land on buttons to open doors. The game is a 2.5-D platformer, meaning that it uses 3-D spaces and models, but you can only travel on a 2-D plane.

This game’s presentation works very well for the grisly ideas the game is trying to convey. The controls are simple; you can move, jump, and interact. The actions of the boy are very fluid and realistic, and the threatening demeanor of the adults in the game adds to the shock of their attacks. However, the shock does not rely on gore.You rarely see blood, and when it is shown, it’s in a darkened area and is hardly gory. Most of the deaths in the game are implied, rather than shown. For example, when you let the boy get caught by a guard, he isn’t killed; he’s choked to unconsciousness without you knowing exactly what happened to him.

Interestingly, a large amount of empowerment comes from light. Guards use flashlights to search for intruders like you, and when they spot you, they’ll run to grab you. Later in the game, you can use light to defend yourself and siphon power.

The music direction is another good conduit for emotion and tension, playing at just the right times to make you calm or anxious.

As you progress, you find that strange parasites have been infecting corpses, reanimating them and using them as mobile meat sacks. You first take note of this when the wormy creatures enter dead pigs, but soon come to realize that human corpses have been used as well. It turns out that the scientists have found a way to control these infected corpses, and you must use that to your advantage.
Further in, you find more experiments, and eventually become part of one yourself. These experiments serve as the thrill factor, causing confusion and awe, and is a major selling point of the game.

Unfortunately, the ending is rather anticlimactic and leaves behind more questions than answers. It is not currently known if there will be a sequel, but there certainly are enough loose ends to merit one.

Overall, “Inside” is a curiosity of a game. It’s dark, twisted, unique, and confusing. The end result is unexpected, but it is the process of reaching that result makes this game intriguing to play.

I'm a Junior, an Editor for Entertainment, and beginning my first year on the Crier staff. I don't have extensive experience with journalism, but I'm here to learn as much as I am to publish information! Other than school stuff, I mostly play video games and write fiction stories.