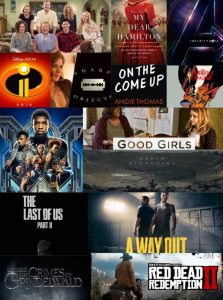 Graphic by Joanne Velasquez; original images obtained through fair use.

As school is always stressful, you may want to help yourself to a distraction. If your favorite show is ending and you have nothing else to binge watch, don’t fret–there are plenty of new releases for you to succumb to the pleasures of entertainment.

Here are some upcoming 2018 releases, with brief summaries. Some information has come from the hyperlinks within the descriptions. Click on these hyperlinks for further information.