The Weeknd makes a “melancholy” return with new EP 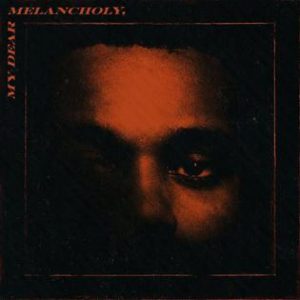 Cover art for The Weeknd’s “My Dear Melancholy”

Some say that heartbreak creates art. This was the case for The Weeknd’s new EP, “My Dear Melancholy,” which definitely lives up to its sentimental name. As one of the most influential artists in modern day contemporary R&B, Abel Tesfaye (The Weeknd) has sent his fans onto another emotional rollercoaster, but this time with a more dark and nostalgic note. The six-track EP, which was released on March 30, delves into the bitterness and misery of loss with his signature style of electro-soul beats and heart-wrenching lyrics.

In comparison to his more pop/fast-paced previous album “Starboy,” “My Dear Melancholy” returns to his initial dark vibes that are exemplified in earlier albums such as “Trilogy.” With the release of “Rockstar,” Tesfaye made a significant change towards a more pop and dance-music style, different from his previous albums. While many people anticipated hearing more of this new style, in “My Dear Melancholy,” he seems to reminisce back to his old roots of nostalgia-inducing ballads, and does a phenomenal job of it. Although the pop side of his music definitely created some memorable fast-paced songs, such as “Party Monster,” it was more mainstream than what his previous music was known for.

Although the new EP only contains six tracks and wouldn’t be considered a full album, it still has smooth transitions from one song to the next. Instead of beginning with a danceable banger, which he usually does, Tesfaye starts the EP off with a mournful slow-paced ballad “Call Out My Name.” With heart-wrenching lyrics such as “We found each other, I helped you out of a broken place. You gave me comfort, but falling for you was my mistake,” and a slow rhythmic piano playing in the background, this first song perfectly introduces the theme of heartbreak that the rest of the EP conveys.

Then, he transitions into one of the faster-paced songs out of the EP, “Try Me,” which brings out a more angsty yet longing vibe. The song is about him trying to convince an old lover to leave her current partner to come back to him.

The fourth track, “I Was Never There,” creates the most dark and perhaps jarring moods of all the tracks. With an eclectic and low-tempo beat, he perfectly highlights the low and self-doubting points one reaches during a breakup. Tesfaye eventually blames his old partner for these emotions with lyrics like, “You’d rather something toxic / So, I poison myself again, again / ‘Til I feel nothing.” However, he transitions into a more angsty and confident vibe in the track right after, “Hurt You,” which does a perfect job of balancing the dynamic out.

In the final song, “Privilege,” the EP ends with the same mesmerizing and slow-paced sound it began with. This song ends the EP on a somewhat bitter, yet truthfully reflective note. It hints towards recovery from the pain experienced from a breakup and returning to “old ways” rather than mourning the loss of a relationship: “We said our last goodbyes. So, let’s just try to end it with a smile.”

Since the EP had a clear-cut overall theme, it makes sense to release it with only six tracks (21 minutes) because if it had more, it would definitely get too repetitive and become a drag to listen to. The Weeknd perfectly touches on and conveys every sorrowful emotion of a breakup in his EP, creating no need for a full track album.

Although just about anyone can relate to the EP’s theme, The Weeknd had made it quite obvious to his audience who the tracks were written about. After dating Selena Gomez for 10 months, the couple split for unknown reasons. Soon after, Gomez was once again back with with her on-again off-again relationship with Justin Bieber. Thus, while listening to the tracks, it’s clear that many of the lyrics relate to Gomez and even his girlfriend before her, Bella Hadid. These references strengthen the EP by allowing fans to connect with where the artist is coming from.

The most outstanding part of “My Dear Melancholy” is how it conveys the raw emotions of heartbreak and ache through introspective lyrics and an intoxicating rhythm. It perfectly captures the different dynamics one goes through after a breakup, from bitter emotions and regret, to reminiscing about past relationships.