The definitive ranking of GamePigeon’s games 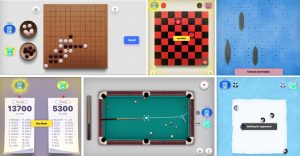 Thanks to iOS 10, it’s now easier than ever to discreetly be off task during class. The software update, among other things, has incorporated a variety of apps directly into iMessage. One free app that has become especially popular among students is GamePigeon. GamePigeon allows players to challenge friends in 11 different games via iMessage.

Of course, not every game is created equal. To help fellow time-wasters, the Crier decided to rank the best and worst of what GamePigeon has to offer.