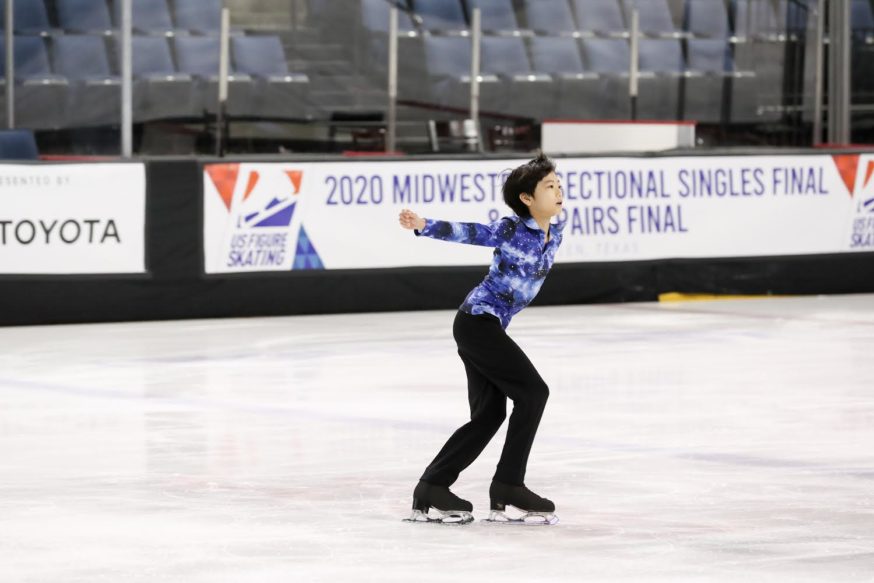 Music fills the ice rink, signaling the beginning of the routine. Immediately, Conant freshman Taira Shinohara glides into his routine for the 2020 Midwestern Sectional Juvenile Freeskate Program, flawlessly executing jumps and spins with pure elation on his face. He takes first place at the competition, bringing home another accolade to add to his bedroom shelf, already adorned with countless medals and trophies.

Shinohara began skating at the age of six, inspired by his younger sister. Though he initially both skated recreationally and played soccer, once Shinohara competed at his first regional competition at the age of 11, he caught the skating bug.

“After the competition, I started to develop my skills, and the process of getting better drew me into this sport,” Shinohara said.

In figure skating, there are several levels, with the senior level being the highest, followed by the junior level, followed by several lower levels. Shinohara will skate as a junior for the next figure skating season, and he is currently working on a triple axel, a jump that could bring him to the few top rankings in the country. He can also successfully land triple jumps, which include toe loop, salchow, loop, flip, and lutz jumps.

“I can do a triple-triple combination, which is a combination where you jump right off of the landing of the first jump. Basically you jump two times back to back,” Shinohara said.

However, his accomplishments don’t come without hardships. From early morning lessons to numerous practices and strenuous conditioning, Shinohara spends most of his time at the rink. Because of the heavy involvement that comes with being a full-time ice skater, time management has been a struggle.

Shinohara had to make sacrifices to skate at the level that he is at right now. He wanted to play other sports like baseball, but his hands were full.

“I didn’t get to do nearly as many activities as I wanted,” he said.

Shinohara hasn’t only struggled with a lack of time, but he also has faced physical stress and exhaustion from the demanding nature of practices and conditioning. He struggled with knee pain, which he thinks was likely from physical strain.

“I didn’t really get to know what was causing the pain, but I think it was from overuse. My coach said it could also be tendonitis,” Shinohara said.

Shinohara may have struggled with hardships throughout his career, but he credits his parents for their unconditional support.

“My parents are a big support for me. They take me to the rink every day, they take me to school, and they also support me financially, as skating is a very expensive sport.”

Along with his parents, Shinohara’s coaches are a big part of his support system. They not only coach him with skating, but they also teach him how to deal with his other problems and emotions. Shinohara has worked with big names in the skating industry. Shinohara’s main coach is none other than Jeremy Allen, a national and international coach who is best known for coaching Olympic bronze medalist Bradie Tennel. Scott Brown, a world and Olympic choreographer, has even choreographed one of Shinohara’s free skate programs.

Shinohara also appreciates the help that his school teachers provide because of his unique schedule.

“When I have competitions, I have to be absent for class, but my teachers help me catch up,” he said.

Shinohara has high hopes for a future figure skating career. He aspires to make Team USA, a team of athletes chosen to represent the US at ice skating competitions, and take a medal at the world figure skating championships. However, Shinohara’s main goal in figure skating isn’t only winning medals and trophies, but rather to have fun skating and to get better every day.

Help Taira compete for the 2021 figure skating season by donating to his gofund.me page