Thursday, Conant will join together to deck the halls with Disney-inspired decorations for this year’s Homecoming. This has been a tradition at Conant for the past 22 years. The Conant class of 1994 began this tradition in 1993 with the theme of Arabian Nights. Below are the pictures from the NHS decorations in 1993, compliments of English teacher Heather Munao, who graduated from Conant that year and was the student responsible for drawing the castle. 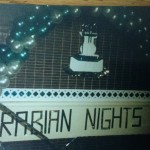 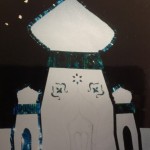 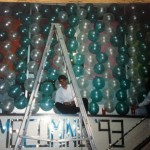 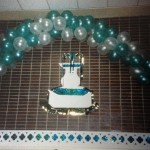 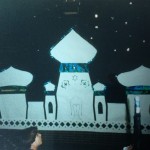 Munao also explained how Homecoming week was filled with traditions we don’t have any more, such as Wednesday night’s Almost Anything Goes, a Homecoming tradition reserved for seniors. This event was a wild night of games and activities filled with cheating and laughter. The night included random competitions, such as a relay with scooters and plungers, rolling footballs across the gym with your nose, blowing a feather with a straw across the floor, and running across the gym trying to keep your Kleenex from falling by sucking on it through a straw. 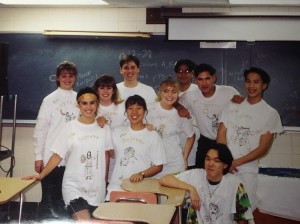 Munao’s team for Almost Anything Goes in 1993

Another tradition was spirit chains. In the cafeteria, you paid a small amount, 10 cents, and you got to attach a link, made out of construction paper, to your class chain. The class chains were made out of the links that students from each class bought, and the proceeds went to Junior Class Council. After several days of purchasing paper links, Thursday night brought the Royal Rally, where students were able to see which class had the largest chain. The largest chain demonstrated the most school spirit. On Thursday night, they also crowned the Homecoming Court.

The week was finished off on Friday afternoon with a school Pep Rally. The cheerleaders performed, and the winning team of Almost Anything Goes would compete against teachers. Munao described her experience as a teacher, “ In my first year of teaching in the fall of 2000, when it was still going on, I was one of the teachers up against them. No lie, I was laid flat by one of the boys. He full-on tackled me.”

If there are any traditions you want to bring back or suggest, comment below!