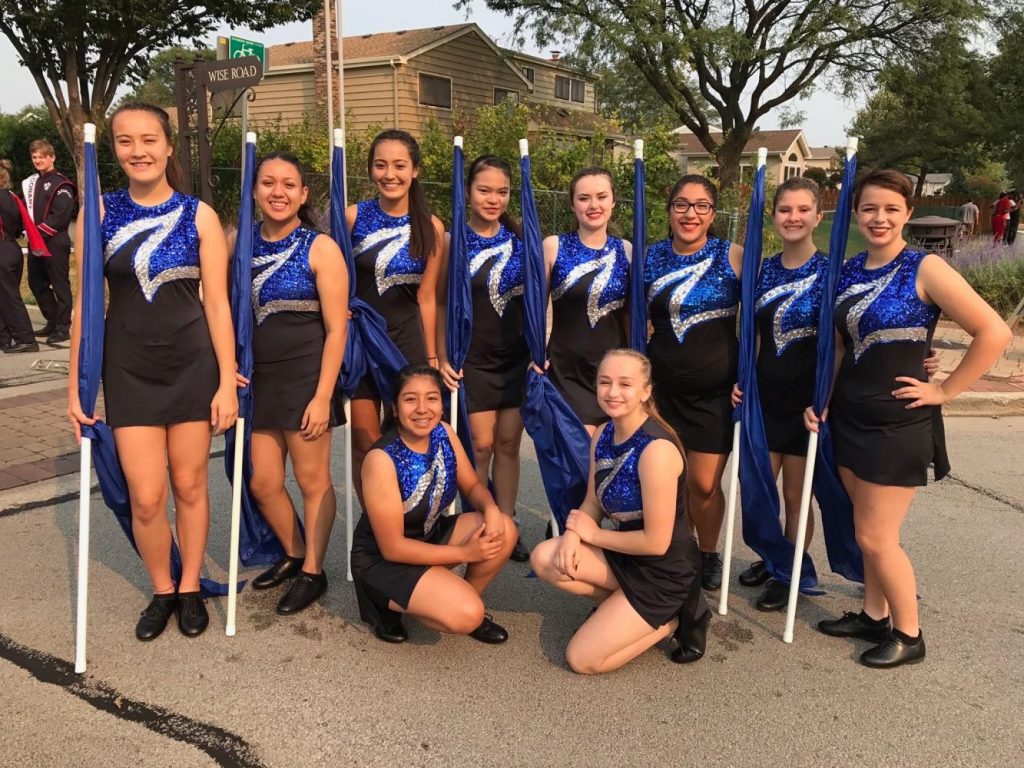 The Color Guard poses with their flags and uniforms at the Septemberfest parade.

The Color Guard is planning big changes for next year, such as extending the season and participating in competitions.

Color Guard Coach and math teacher Victoria Wierec said, “Depending on the number of members, we plan on having a winter season next year.”

She added that members must be in fall guard to be in winter guard and that they plan on having a summer workshop, similar to that of marching band, this upcoming summer to prepare for the extended season.

The Guard also plans on competing next year during their winter season.

Wierec said, “We would practice one to two routines and compete with them throughout the year, like cheer. We would compete in seven to eight competitions during the season and could go
to sectionals and state.”

Additionally, they hope to be a part of events in the future like the Septemberfest parade and the trip to Disney World, where they will perform alongside the band. To get started with this goal, this year, the Color Guard participated in the ABC7 news Flyover Competition.

The competition welcomed students, staff, parents, neighbors, and local business owners to the Conant football stadium on Oct. 6 to honor members of the CHS community who currently battle, or have battled, breast cancer. The flyover was broadcast on ABC7 News.

The Color Guard helped to create the outlines of the three field formations that made the breast cancer ribbon for students to then fill in. They dressed in pink, showing their school spirit and empathy for breast cancer survivors.

Wierec said, “The color guard worked with the band a lot beforehand to work on formations. The flyover was featured on the news, which the girls were excited about.”

Daniela Rodriguez, ‘20, said, “Personally, I’m grateful that I can be here for all of these huge steps that color guard is taking to improve and just get better as a performance group.”