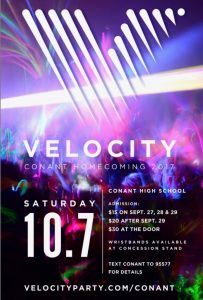 Changes to the coronation assembly, the hallway decoration night, and the dance make this year’s Homecoming week different than years past. The theme is Dancing Through the Decades.

This year, the teachers also only nominated juniors and seniors for Homecoming court to make the assembly more personal than previous years.

Student Council Advisor David Moravek said, “[Student Council] wants to make the assembly more formal this year and recognize the juniors and seniors for all of their accomplishments in high school.”

Another change is that the big decorating night where all clubs put up their decorations will now be on Wednesday instead of the Thursday during Homecoming week. Clubs can touch up the decorations after school on Thursday.

Moravek said, “This is so the decorations can stay up longer than just a day.”

The change was also prompted by an ABC 7 news helicopter flyover Friday at 5 a.m. Students need to wake up early on Friday morning as the helicopter flies over the football field to take a photo. Students, staff, and community members are encouraged to attend.

Velocity will be the DJ at this year’s Homecoming dance. Velocity is a sub company of DJ4U out of Peoria, Illinois. Student Council changed the DJ this year from Boom Entertainment. The Student Council board and the advisors did interviews with three different DJ companies and decided on Velocity.

Student Council Co-President Luke Logerquist, ‘18, said, “The DJ from last year didn’t take song requests, and Homecoming went downhill from there. With the equipment they brought, it wasn’t taken down properly, causing the gym to be messed up.”

Students are looking forward to having a new DJ this year.

Student Council Vice President Gargee Pandya , ‘18, said, “I would love a DJ who would play songs on the radio and older popular songs. Someone who is very versatile would be perfect.”

This year’s dance will include confetti cannons and CO2 blowers, which are machines that blow large blasts of carbon dioxide into the air to cool down the gym.