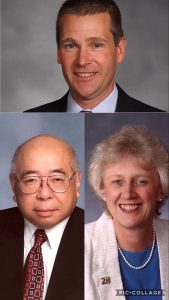 After much controversy in recent years over the bathroom rights of transgender students in D211 schools, the Schaumburg-Palatine community expressed their preference for experienced leadership when handling student affairs, with Anna Klimkowicz, Robert LeFevre Jr., and Edward Yung winning the school board election. Klimkowicz and LeFevre were reelected to their current positions, while Yung will be returning to the school board after four years, replacing Mike Scharringhausen, who did not run for reelection.

Klimkowicz, LeFevre, and Yung support the District’s current policy, which allows transgender students to have restricted access to their gender-identified bathroom. Klimkowicz stated, “Restricted access is the best compromise that makes sure that every student is respected.”

David, Bonatz, and Forrest were against the district’s current policy and argued that student privacy could be achieved only by allowing student anatomy to determine locker room access. On May 4, 2016, Parents for Privacy, a D211 group opposed to the district’s compromise, filed a lawsuit against the U.S. Department of Education, the U.S. Department of Justice, and District 211. Parents for Privacy put their support behind the slate of David, Bonatz, and Forrest.

Although many disagree with the district’s position, CHS parent Dominice Einig believes Klimkowicz, LeFevre, and Yung “have a track record of maintaining an open mind and acting in the best interest of students.”

LeFevre added that the voters that turned out showed community support for the board’s stance. He compared the election to the one in 2005 where there was a financial referendum on the ballot. He said, “This election was a sort of social referendum over a contentious issue.”

Cates said, “The election helped to clarify that it is the will of the community to continue the District’s supports for transgender students.”

Both Klimkowicz and LeFevre believe that their individual campaigns focused more on education than on the transgender rights issue. Klimkowicz said that she wanted to “focus on moving forward with education,” and LeFevre stated that he “only addressed the issue when asked about it.”

Before the election, all six candidates attended two events to answer questions from the community: the 1211 Teachers’ Union Forum at Conant and the League of Women Voters Forum at Palatine Township. LeFevre said, “Some people were set on their beliefs and knew who they were going to vote for before the forum, while, for others, the forum was a good opportunity to understand the issues.”

Like Klimkowicz and LeFevre, Cates also emphasized educational initiatives, including “the creation of a readiness plan for each individual student, a review of our grading practices, continued emphasis on enrolling students in more rigor, and an emphasis on assisting students to earn college credits prior to graduating high school.”

Klimkowicz is a proponent of the new strategic plan and improving college and career support. She is looking forward to working with the school board on that initiative.

LeFevre, now on his fourth term on the board, said, “I ran to perpetuate an outstanding value, not just to be a board member.” He adds that he “wants to uphold an outstanding school district that [he] attended and provide educational opportunities to everyone in the community.”