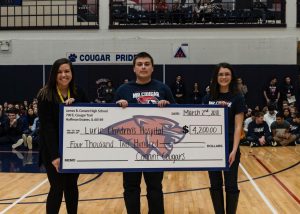 Through the Winter Fest dance, Student Council and NHS raised $4,200 that went to Lurie Children’s Hospital in Chicago.

Even though Student Council has planned Winter Fest many times in the past, this time they “tried doing something different for the winter formal dance,” Logerquist explained. They decided to put the proceeds from the tickets and XXL cookies, which were sold for two days during all lunch hours before the dance, towards charity. Even at $2 per cookie, the cookies ran out an entire day earlier than expected.

NHS Co-president Valeria Moreno, ‘18, described the steps they took to make students aware of this event. “We knew the best way to reach out to people was social media,” she added. “We know posters are a big thing, but we knew people are 24/7 on Twitter.”

Moreno said that, every day for two weeks, an NHS member posted a video or meme to get the word out.

Logerquist said that they choose to donate to Lurie Children’s because “the whole idea is that we wanted to just give back to the people who suffer from pediatric cancer and also wanted to make sure this is aware and known throughout the community.” Brian Beam, a Conant alum who graduated in 2016, was recently diagnosed with brain cancer. With many students and staff, including Logerquist, knowing Beam personally, they really wanted to show their support through this event.

Student Council Advisor David Moravek said Student Council wanted to create a certain vision for Winter Fest, and that it’s a dance they’re trying to reinvent. Their goals were “to help draw attendance and raise money for charity,” Moravek said.

Kerns said that the money raised will go toward their research program called Precision Medicine, which “is targeting treatment for that child.”

This program is essential for cancer research because no two cancers are the same.

Kerns explained that the money raised is put to what their greatest need is, whether it is research, community care, or patient programs.

To continue to support Lurie’s cause, students and their families can be “advocates in the communities, and being part of the dance marathon really continues to help us do the work that we do,” she added.

Kerns is grateful for the support the hospital got from Conant. “Every dollar that was raised, and every student that attended the event, is truly making a difference in the lives of your guys’ community,” she said.

Logerquist said that they are trying to raise money for charity through next year’s winter dance, but they’ll make into more of a dance marathon. “We’re going to try to keep it going and just make sure this tradition stays on,” he added.

For more information on how to donate to Lurie Children’s click here.