Fall sports end their seasons on a successful note

Bouncing back from a frustrating season last year, the boys’ varsity soccer team finished the season 20-5-1. The team won the Mid-Suburban West Regional Champion title, and reached “Super Sixteen” status in the IHSA Sectional Finals. Their season came to an end when they lost to York High School, last year’s state champions, in the last two minutes of the sectional final. The team became Barrington Classic Champions for the first time in Conant’s history and the Body Armour Championship Series Top Host. Forward Carson Belcher, ‘23, earned All-State honors and was named the captain of the 2022 Daily Herald Cook County All-Area Soccer Team. “Going from two wins a season ago to twenty wins, I think it’s telling of the passion and determination of the team,” center back and captain Aarav Raina, ‘23, said. “We took the underdog mentality, ran with it, and proved everyone wrong.”

Though the varsity team graduated 8 players out of the 11 starters, they pulled a 15-7 record for the year and finished 6th in conference with a 6-2 record. Katie Strillich, ‘25, made history, becoming the first all-state player from Conant  with her 9th place finish in the state tournament. “Everyone was very committed to being a part of the team and everyone was able to improve their skills as the season went on, leading to many close matches against really good schools,” Strillich said. Especially with a team filled with new varsity players, teamwork has played a crucial role in the teams’ development. “Our girls became more comfortable pushing one another and growing as a team to better the future of the program,” said tennis head coach Matthew Marks. “After a year of firsts for a newer younger varsity squad, I am excited to pick up where we left off next year and continue to grow and develop as a team with plenty of experience.”

The boys’ cross country team achieved their highest team finish since 2008, placing 23rd at the 2022 IHSA Class 3A State XC Championships. The team qualified to state after finishing in third place at the 2022 IHSA Class 3A XC Regional and seventh place at the 2022 IHSA Class 3A XC Sectional. The team also won the 2022 Sterling HS Invitational, and Jayden Patel, ‘24, Gaven Coprin, ‘24, Connor Ariunbat, ‘24, and Vijay Krishnamoorthi, ‘23, were awarded All-Conference accolades for their performance this season. “While our season didn’t finish close to the way we would have liked, we’re really proud of how it went overall,” team captain Vijay Krishnamoorthi, ‘23, said. “We trained harder than we ever did the entire summer and fall, and finally saw the growth we’ve been striving for the past 3-4 years.” 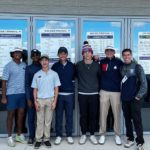 The boys’ golf team had a season filled with wins and broken records, finishing 2nd in the MSL Conference. Along with the overall conference record of 12-10, Aashir Patel, ‘23, won two invite tournaments, placing top 5 in the MAJGT tournament and leading the team as a medalist at the Plainfield North Invite. Nicolas Simon, ‘24, won IHSA Regionals for the 2nd year in a row, and Antonio Gutierrez, ‘25 and Simon both qualified for the IHSA State Finals. Conant Golf as a whole broke multiple records. The Season team average was 149.6, Simon and Patel set the 18 hole scoring record of 69, and Simon set both the individual 9 hole scoring record of 30 and also set the conference scoring average record of 34.2. “I’m extremely happy with how the team improved over the last year,” golf head coach Scott Cieplik said. “Off season work and tournaments are extremely important, and a lot of our players put in the work to make the team and individuals better.”