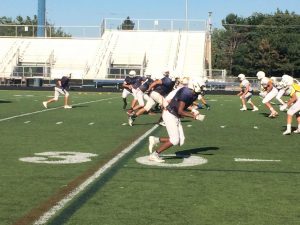 Pedro hands the ball off in an August practice.

With Conant’s two varsity quarterbacks, Matt Majer, ‘18, and Kevin Polaski, ‘19, knocked out with concussions toward the end of the second quarter on Friday, starting sophomore team quarterback, Ross Pedro, ‘20, had to step up against Hoffman Estates in a game that was 0-0 at halftime.

“At first it was a little nerve wracking, but you settle in, calm down. You can’t show you’re nervous at all, you have stay up and have everyone else stay up after losing your two varsity quarterbacks,” said Pedro.

Pedro was the only quarterback available that knew how to run the offense because the sophomore and varsity teams run the same plays.

“I think that everyone knew that they needed to help him because he was so nervous, and I think we did alright with that,” said captain Jack Reiger, ‘18.

“They were all supportive; they gave me ‘good lucks,’ and they’ve helped me out in practice,” said Pedro.

The sophomores go against varsity at practices, which made Pedro feel more prepared.

Pedro said a difference between the sophomore and varsity levels was the speed of the game, which Pedro said he had to slow down to his own pace.

Pedro and the offense did not score until the final minute of the game, which they lost 20-6. The lone Cougar score was a 16-yard touchdown pass from Pedro to tight end Mason Sykes, ‘18.

“It was definitely good, but I also felt I didn’t do enough to help the team since we wanted to win that game. That was our goal. We didn’t want to go for just one touchdown,” said Pedro.

Coach Bryan Stortz said about Pedro’s performance, “Outstanding, he threw the ball well enough where the other guys have got to make plays.”

Pedro finished the game 3-for-13 passing for 28 yards with one touchdown. If Majer and Polaski are unable to play on Thursday night against Fremd, Pedro will be the starting quarterback.