A look inside how coaching affects family life

Coaching comes with an opportunity cost: family time. Working long days throughout the season diminishes the amount of time coaches can spend with their families. Still, their families get to spend time with them during the season and understand why coaching is so important to them.

The hours away from home

According to Athletic Director John Kane, it is hard to say how many hours a coach works in a week because they dedicate more time to coaching than just running practices. They are also responsible for filing paperwork, learning new techniques, learning how to be a better coach, and taking care of a long list of responsibilities.

Head football coach Bryan Stortz estimated that on a day with a normal practice schedule, he leaves the house before 6 a.m. and doesn’t come home until around 8 to 8:30 p.m. Though this is tough for his wife and four children, he said his wife understands the benefits of coaching. Stortz said, “One of the things with my family and my wife is they see a lot of positive things that come out of these kids, not from just a football but from really just a ‘Hey, you can make a difference’. You are teaching them a lot of core values for life that, [and] that’s why [families] do what they have to do in order for us to get out there.” 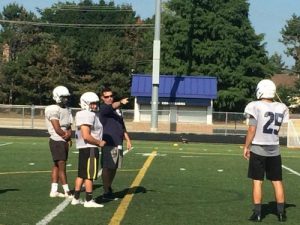 Football head coach Bryan Stortz (middle) and many other coaches coach their players almost everyday of the week. While doing so, it affects their time they spend with their family.

Head wrestling coach Chad Hay elaborated more on how the entire family has to buy into coaching. Hay, who has three daughters ages eight, seven, and five, said, “Now we have gotten to the point where they are old enough to hang. So they come to the duels, they come to the tournaments. It’s really nice because I get to see them, they get to see me, it’s not like I’m gone all the time.”

Hay added that his daughters have gotten into the sport of wrestling and that all of his wrestlers know his daughters. The wrestlers also know Hay’s wife, Katie, who is a volunteer coach on the team.

Hay said, “We have an end of the year highlight film where she does all the interviewing, all the film editing, and we put it on in the auditorium.”

Another way Katie helps with the team is by baking “power muffins” for big meets. Hay described the food as blueberry muffins with a lot of power foods in it.

Head badminton coach Erin Garrity-Duffey said, “My husband is ‘Mr. Mom.’ He gets out of work at a reasonable time, like three in the afternoon, which is when the kids get of school.” During the time she is coaching, her husbands takes their kids, which are six and four, to practices, games, and rehearsals for dance.

For head girls’ golf coach Megan Hebert, who has two two kids ages six and three, her husband also takes on similar responsibilities during her coaching season. Some days, she hardly sees her kids. “Sometimes I don’t even see [my kids] except really quick in the morning to say ‘Have a great day.’”

Players also understand the sacrifices coaches make to coach team. Filippo DeFrenza, ‘19, who plays for both Stortz and Hay, said, “They both dedicate their family lives and their lives to us, and I think that’s why we expect to perform to our best ability for them because they are there for us for four to five months out of the year without their families.”

The hours at home

During the week, a coach’s family does have to work harder to figure out how to get through the day. Stortz’s wife, Jamie, said, “I would say the hardest part around here during football season as a football wife is the logistics of getting four kids to four different sports and activities and homework, dinner. It takes a village.”

Jamie explained that after Bryan took the head coaching job at Conant last year, their family had to move from the Rock Island area to the suburbs of Chicago and didn’t have that village when they first moved in. Now that they have settled in, the village that includes neighbors they now know can carpool their kids because Jamie can’t take her kids everywhere.

Head girls’ swimming and water polo coach Justin Bickus said that one of the activities he misses out on in the fall is going outside with his kids when the weather is still nice.

Even with a coach’s schedule being busy during the week, there is one day of the week where they have time off: Sunday.

For Hay’s family, Chad and his daughters will get up in the morning and let Katie sleep in. “I’ll normally take the kids to Spunky Dunkers Donuts, which is not too far away from our house,” Hay said. “We’ll go and make a little date out with the girls, get donuts, and we’ll typically hang out all day. In the winter it’s pretty chilly, so we’ll watch movies, go to the movies, or whatever.”

Garrity-Duffey said, “We go museums. We try to play outside as a family — just be active as a family.”

“You almost appreciate that time more because you are balancing your schedule and your time,” Bickus said.

Sunday is also a day that allows coaches to plan for the week. Hebert said, “Sunday is definitely a big day in our house. We are always getting ready for the week, preparing coaching-wise and school-wise and family-wise.”

Even for all the job demands, the coaches agree it is rewarding. Bickus said, “For me, the payoff is in the athletes — them improving and having success and having fun together.”