After winning their third consecutive sectional title and placing second in conference last year, coach Dave Koleno hopes to bring in another successful season for boys’ tennis this year. 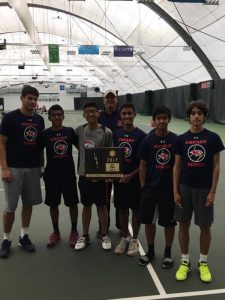 The boys’ tennis team last season celebrates after placing first in their sectional.

The team kicked off their season with a 6-1 win over Maine South on Monday at Conant.

The team loses Kim and Rao this year, but Koleno is confident that the team can rebuild and bring it again this season. “I am really looking forward to seeing how much better the boys got during their off season,” he said. “They’ve been working hard and playing a lot of tennis, so every year it’s great to see improvement.”

Koleno commented on a collective goal for the season. He said, “We hope to improve on everything this year and place higher in some of our tougher weekend tournaments.”

Returning varsity seniors Rosas and Ronik Shah said they are ready to make their last season their best.

Rosas has been part of the varsity team since his freshman year. He has been part of all three of Conant’s titles in sectionals since 2015. Going into his senior year Rosas said, “My goals for this season are to win conference, sectionals, and hopefully make a deep run in state. I can’t wait for season to start, and I’m really looking forward to it.”

Shah has been part of the varsity team since his sophomore year. He said he has spent time since last season sharpening his skills in hopes to achieve his goal to qualify and “compete in the state tournament.”

Shah is ready to practice hard with his teammates in order to finish off his senior year strong. “I anticipate on facing a tough sectional this season and will have to beat out great teams to advance,” Shah said.

This will be Koleno’s sixth year coaching with Conant tennis. He explained, “My goal is to provide an overall positive experience for our players, one that helps them create friendships that last long after the season is over.”

Business teacher Matt Marks joined the coaching staff as the JV coach for Conant in 2016. Koleno expressed he has enjoyed working with Marks and said, “I am excited to have Coach Marks back with the program. He has been a great asset to the program since he joined,” Koleno said.

The team’s will play next in a quad at Wheaton North on Saturday.