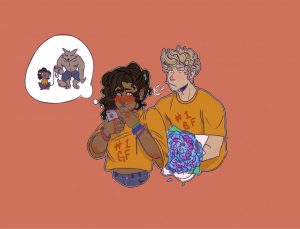 According to its about page, the story-sharing site Wattpad is “a one-of-a-kind adventure in creation and discovery.” With over 65 million users, people find themselves connected in a community like never before—one for writers and readers alike. But even with this mix of diverse authors and genres, several themes come out on top as the most popular, and many of them promote unhealthy ideals in modern romance.

Wattpad was created in 2006 by CEO Allen Lau in an attempt to break traditional barriers between readers and writers. Now, chapter-by-chapter online publishing allows instantaneous feedback from readers and allows members of the community to publish their writing without completing a book first. This design should allow authors to collectively get better as they ask for constructive criticism and get it back right away. In fact, the stories with the most views are on the table to be published as real books in the future, due to Wattpad’s connections with real publishers.

However, such an arrangement doesn’t stamp out reoccurring themes in the most popular genre on the site. Several romantic trends repeat themselves throughout the top charts.

Some of the trends include Forced to be His, a story about a woman who falls in love with a man who, as the title indicates, forces himself on her without her consent; Sold to a Wolf Pack, where a young woman gets traded in to a werewolf pack so her father’s debts are forgiven, where she eventually falls for the “Alpha” wolf; and She Belongs to the King, in which no one asks out a teenage girl because she is claimed by a billionaire bad boy with anger issues and a superiority complex.

As a result, an idea is promoted that a relationship can be built on unhealthy romantic ideals, some that wouldn’t even have been acceptable in the early twentieth century, when romance first made its debut in popular culture. The worst part is the fact that those aren’t the only three: Wattpad is plagued with hundreds of stories similar to those in the top charts of almost every genre.

This popularity has led to a concerning effect: types of stories like these have sprouted their own official Wattpad genres, such as “billionaire,” “werewolf,” and “vampire.” Plus, with the millions of views these chart-toppers get, new readers are directed toward these unhealthy romances and taught that it’s totally normal to fall in love with an abusive partner.

By allowing this encouragement toward unhealthy relationships, young writers are continuing the cycle, portraying abusive “love” and topping the charts over and over again. Not only that, but original stories with unique storylines and healthy love stories are often pushed aside to make way for the possessive Alpha or the bad boy millionaire.

Because of this, Wattpad has not become a revolutionary writing tool like Allen Lau intended. Instead, it has become a breeding ground for poorly developed female characters who are cheered on in their submissive roles. Instead of encouraging sameness and popularity, the owners of Wattpad should give more positive attention to original books.

Popular culture is a critical influence in young lives. 85% of readers on the writing site are between the ages of 13 and 30, and if Wattpad doesn’t make a change soon, then a new generation could grow up believing that abuse is a romantic gesture. Wattpad should take action to cut down on these issues and prevent the normalization of unhealthy romantic relationships.