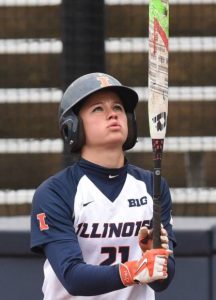 After being an assistant coach on last season’s softball team, Allison Bauch, ‘12, has replaced CathyAnn Smith as head coach.

After winning 350 games during her 18-year career as head softball coach at Conant, IHSA Hall of Fame coach CathyAnn Smith retired from coaching after last season. But Conant did not have to look far for Smith’s replacement, hiring 24-year-old former assistant coach Allison Bauch, ‘12, to take on the head coaching position.

“Age is only a number,” Bauch said. “Now, obviously there are downfalls to it because I don’t have a lot of coaching experience under my belt. But I have a lot of player experience, so I think that gives me a lot of confidence heading into this role.”

Smith said, “Coach Bauch will be a solid head coach because her knowledge and passion for the game exceeds her age. She has the maturity and experience of being a talented and competitive player in our program, at [the University of Illinois] where she was a standout player for four years, and then playing professionally for the Chicago Bandits and winning the World Series.”

Along with being an experienced player, Bauch has also been gaining coaching experience over the previous two years by helping coach at U of I during her fifth year there, at Elk Grove in 2017 during her student teaching, as well as with the Schaumburg Sluggers 14U team in that same year.

The Conant community, including her coaching staff, is ready to help Bauch with any challenges that she might face in her first year as head coach. Kane said, “There’s a lot of people she can come to for advice and to help her through just what any head coach goes through throughout the season, whether it is involving paperwork — some of it is making decisions within your team.” Kane added that Bauch can also ask for help on how she manages each game as well as how she sets up the schedule for her team.

For now, Bauch looks to build off the winning tradition and culture that Smith left for the team. “I hope to keep that alive by doing a lot of team building, keeping the girls close, and understanding the importance of being a team and learning to trust each other,” Bauch said.

Bauch’s players are ready to take her in as their new head coach. Varsity softball player Morgan Long, ‘19, said, “I’m very excited. I think that it will be a good opportunity for the softball program with her previous experience playing pro and for Illinois.”