After years of dealing with elbow discomfort, a former Cougar pitcher decided to get Tommy John surgery to help stop the pain and return to the mound, where he has found success.

Brian Polaski, ‘14, finally reached a breaking point after pitching only one inning in his first two seasons at Carthage College in Kenosha, Wisconsin. “I ended up going to a doctor, who had taken an MRI scan and diagnosed me with a torn UCL. At least, it was partial micro tears in the UCL. There were so many of them, it was destined to either bust or tear entirely,” Polaski said, who got the surgery in the summer of 2016. 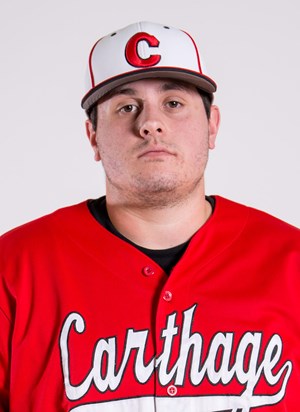 Brian Polaski, ‘14, had Tommy John Surgery in the summer of 2016. He has set records on the mound since the surgery.

Tommy John Surgery is a procedure that involves repairing a torn ulnar collateral ligament in the elbow with a tendon from elsewhere in the body, according to John Hopkins Medicine. The surgery is not uncommon for pitchers, and it can take more than a year for a person to fully recover.

The recovery went well for Polaski. “It’s a crazy process. They really do a great job of rehabbing and getting you back out there. They don’t want to rush you out there and get you going before you’re ready. They do a fabulous job of giving you different kinds of exercises and stretches and different ways to cope — even after surgery it’s pretty painful,” Polaski said, who added that his arm did come back even stronger after he recovered.

Polaski returned in the 2018 season and made an immediate impact. He led the College Conference of Illinois & Wisconsin with 10 saves that season and was named the Augie Schmidt III Most Valuable Performer by the school’s athletic department.

“Once my arm started getting back into shape, everything kind of followed suit. I started to throw the ball a little harder. I was able to get guys out for my team. Again, we have a great team here, guys who can play the field, guys who can hit, so you have very little pressure when you’re out there. That season was one of the best I’ve ever been a part of with a team,” Polaski said.

Jerry Song, who was Polaski’s head coach at Conant in 2013, remembered him as an ambitious player. “He was definitely a gamer. He wanted the ball. Always showed he was determined to be successful, and he was a great listener, very coachable,” Song said.

This season, Polaski broke the all-time career saves record at Carthage. “Last year, when I had broken the record for most saves in a single season, I knew I had beaten that one, but this year, when I got my third save, I really didn’t know about that record, so when I was able to put my name among some of those great Carthage pitchers, I was really, really amazed,” Polaski said, adding he hopes to keep pushing his bar to a higher level and playing ball for as long as he can.

“I hope nothing but the moon for this kid,” Song said. “I mean, when you go through what he has gone through, some kids, not just kids, but people would be like ‘I’m done. I can’t do this.’ But obviously he conquered the surgery and he’s doing great. I think he is going to go far.”

Polaski will have one more season of eligibility after this season and plans to graduate with a major in graphic design and a minor in sports marketing. He found an interest in graphic design after taking art teacher Justin Bickus’s classes at Conant.

“It’s awesome to hear stuff like that because there are a lot of people who [say] ‘I don’t know what to do after high school or after college’ and I think that could be a really cool career,” Bickus said.

“The dream job would be to work in professional baseball as a person in the field that can work with different advertising commercials with my graphic design degree,” Polaski said.