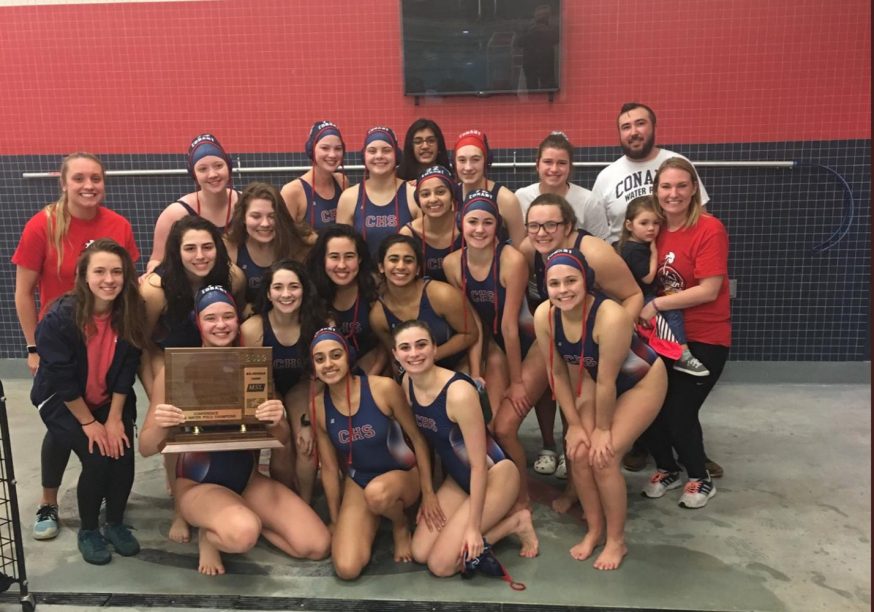 The girls’ water polo team after winning the MSL Conference Championship over Buffalo Grove on May 1.

In the past four seasons, the girls’ water polo team won Conference three times and qualified for State three times. This season, the team is currently 28-2. The team won the Palatine Tournament for the first time, and also won the MSL Conference Championship. Team members have attributed this success in part to their team culture, which includes passion, team bonding, and sportsmanship.

“My girls just really love the sport,” Bickus said. “We never had anybody come in playing the sport, so everyone’s developed their love while they’ve been here at Conant.”

He added, “When I’m coaching, we’re trying to get better, but I also think that we have a good time, and I think that’s definitely one of our cultural things. I think we have pretty high expectations as far as practices and games, but I think it revolves around having a good time while we’re here.”

“[Bickus] really wants to be involved with the team,” two-meter player Abigail Hanley, ‘20, said. “We’ve been doing dress up things or whatever, and he’s been into it. Like our last tournament we all wore hats, and he was like really into it. He brought a bunch of hats and wore it the whole tournament while he was coaching.”

“He tried to get us involved with team bonding, like he wants to do it with us. He just connects us all together more,” two-meter player Gabi Konieczny, ‘19, said. Many of the players spend two seasons with Bickus, as he is also the head coach for girls’ swimming.

Not only do the girls on the team have respect for each other, but for other teams. Last season at the IHSA State Finals, they were the only team to receive a sportsmanship banner. “It’s something we talk about, having respect for the game and your opponent,” Bickus said. “I think water polo, if you’ve seen a game, it’s a pretty intense crowd sometimes, so I think Conant’s got a pretty good track record over the years of being respectful, and that’s something we try to communicate to our athletes and their families.”

“After every game we’ll do a cheer for the other team and just recognize how well they played,” Hanley said. “It’s not like we’re there just to care about ourselves. We care about the other teams and supporting them.”

Bickus has received help from boys’ water polo head coach Tim Daniel. Bickus, who didn’t play water polo in high school and is in his 11th season as head coach, learned to love the sport while he was coaching. Daniel is a junior olympic developmental coach, and Bickus learned a lot about the game from him.

“I ask questions a lot, even today, from Tim,” Bickus said, who has also learned more about the sport as he gains more coaching experience.

Many of the players participate in Northwest Chicago Water Polo (NWC) in the offseason. “Because our team has been so successful in the past, we want to keep that up, we want to keep winning, and the only way we can do that is to practice and get better,” Hanley said. Last summer, some of the players went out to Michigan for a tournament.

The State Series is coming up for the team. The Sectionals will take place at Conant from May 6-11. If the team wins Sectionals, they will qualify for State, which will be on May 16 and 18 at Stevenson High School.