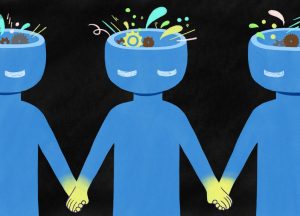 The kids aren’t alright. Or at least, that’s what it feels like in the wake of the school shooting in Parkland, Florida.

Since the shooting on Feb. 14, Conant has experienced two safety “scares.” In both cases, no students were in danger, but in both cases, rumors and exacerbation of the situations caused students to believe that there was a threat.

The rumors and gossip that spread through the student body caused some students to believe that there was an actual threat to their safety. Many students were called out of school. Many more sat in their classes, uncertain and fearful, until Nowak announced that there was no threat.

On Feb. 28, a power surge during a passing period left Conant in the dark for a minute at most. But that minute was enough to stoke fear from students and staff, as many reacted to the situation as if the school were in a lockdown.

The Conant community is on edge. If there’s one thing the Parkland shooting made clear, it’s that this type of event can happen anywhere, even in a nice community considered the safest in its state.

Everything and anything seems like a threat, as guns and schools have become an inescapable part of our current news cycle. As we continue to try to process the horror of what happened in Parkland, we are peppered with information about more potential threats in schools from neighboring districts like Lake Park High School,  Mundelein High School, DeKalb School District 428, and Niles North High School.

If students don’t feel safe in school, it can inhibit their learning. But we, as students, can help minimize this problem.

As students, we must be more logical when evaluating what we see as a threat. It is important to be vigilant, but we must also be critical and cautious when voicing concerns. For instance, a major reason that recent events at Conant caused such panic was because rumors and misinformation were spread rampantly.

If you have have a genuine safety concern, you should report this to a teacher or your team room as soon as possible. Alternatively, you can report incidents on the school’s anonymous safety concern center. This way, administration can deal with potential safety issues. On the other hand, spreading rumors to friends or on social media, even if it is intended as a “warning,” is counterproductive. These stories have a tendency to become exaggerated or mistold, and can cause unnecessary anxiety among students.

This should go without saying, but nothing related to school safety should be taken as a joke. The recent incidents in other schools have mainly originated due to “jokes” posted on social media. Trying to make a joke out of school shootings is sick and unacceptable. There is no excuse for trivializing these massacres. In addition, even if you make a comment intended as a joke, your peers probably won’t see the humor in it, and may perceive it as a threat. These so-called “jokes” cause anxiety and fear.

As a community, we must also look out for each other. If you think your friend is having a hard time, you can let any adult at Conant know, and they can treat your concerns confidentially. More generally, students should make a point to be open and respectful of others. With all of the supports offered at Conant, no one should feel isolated or disconnected from the community. We can all facilitate this through showing kindness and respect for all of our peers.

Our administration is actively working to keep our school as safe as possible. Principal Nowak’s recent newsletter addressed the many safety measures implemented at Conant.

Times may seem bleak, but we are not alone. If we stand together and take a rational and no-nonsense approach to school safety, we can avoid unnecessary anxiety. Conant is an incredibly supportive and strong community. As long we continue to take care of one another, we should have nothing to fear.