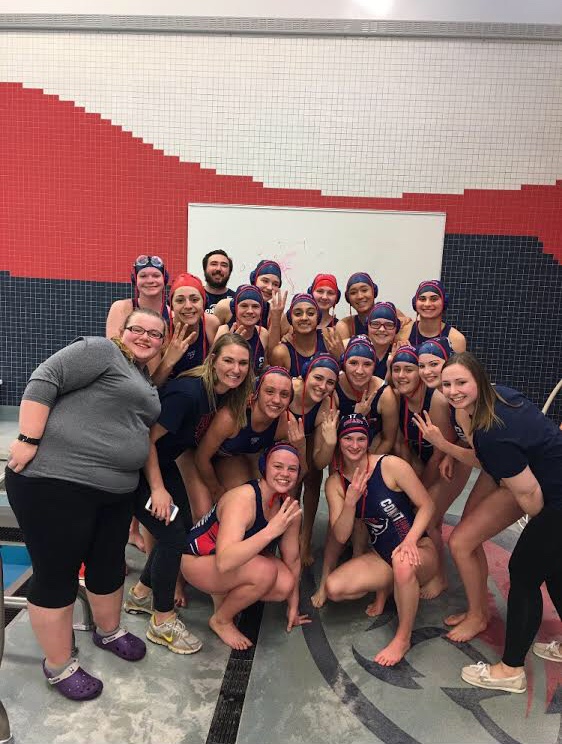 The Conant girls’ water polo team looks to continue their recent success in the upcoming season after winning Conference last year and coming up just short of State.

The team has already set their expectations high for this season. Coach Justin Bickus said, “We would like to repeat as Conference Champions and try to win our Sectional. That’s always our goal.”

The team won the MSL Conference Championship last year and lost in the final sectional game in the playoffs. The team had made it to State back-to-back years in 2015 and 2016.

Captain Amy Rodriguez, ‘18, said, “Last year, losing at the final sectional game was rough, so I think that will help when girls are thinking about skipping a practice or leaving early for no reason. It will remind them that this is what we are here for; we don’t want this to happen again.”

Another one of the team’s main goals is to remain concentrated on their games and practicing hard throughout the season.

Nia Tsoulos, ‘18, said, “We have to stay focused. Other conference teams have lost very good players, but that doesn’t mean that we step down our game that means we step up our game even higher.”

The team will face several tough opponents through the course of their season. “Out of the MSL West, Fremd and Barrington usually bring it,” Rodriguez said. Bickus said that Hersey and Prospect will be their toughest competition out of the MSL East.

The team has to prepare a lot physically in order to keep up with the demands of the game. Bickus explained, “We do a lot of conditioning, but it’s blended. We don’t just swim; we usually swim while doing some kind of other drill.”

The team also does game-situational drills to prepare for their tough opponents. Their primary focus is on counterattacks and half court offense. These skills have the team in a spot where they can go out and win a game every day.

Four of their top players, Cam Rosas, Paulina Chowaniec, Lea Cejvan, and Olivia Konieczny, graduated last year. Even with a new lineup, Bickus said that he will still have a solid team. “Every year is a little different. We play off everybody’s strengths. I think we will be a fast team, and we have some skilled players. We have to gain some experience playing together, but overall, I think we will be pretty competitive,” he said.

He expects to see improvement both individually and as a team as the season progresses. He said, “One way or another, we are going to be a better team at the end of the season.”

The team won their first game of the season on March 5 against Maine East at Conant. The team will play 30 games in their season.