How much parent involvement is too much? 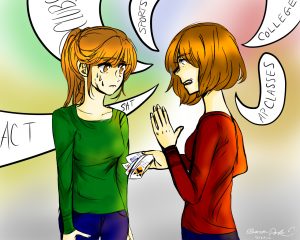 It is not even halfway through the school year, and students are already considering and scheduling their courses for next year. These choices are carefully thought out, and one of the many contributing factors to the final decision is parents.

It is not uncommon for students’ opinions on course selection to come into conflict with their parents’. Parents do offer valuable advice on academics, but shouldn’t get overly involved. The choice should ultimately belong to the students.

It is beneficial to have some level of parent involvement and advice in scheduling. They have already gone through the process of high school before, so they have a lot of valuable advice to offer. However, this involvement becomes excessive when the parents become the main–and sometimes only–motivation for students to do well in school. Such involvement will make the transition to college more difficult.

The idea of college intimidates me sometimes because I will be leaving the things I am familiar with behind, and I will no longer have the safety net of having my parents around 24/7. When students go to college, they will no longer be able to lean on their parents, and for those whose parents were one of the driving forces in their school life, it will be as if someone had pulled the rug out from underneath them.

Courses and activities should be based on what a student is interested in and what their personal goals are because their courses choices will assist them in determining what they want to do for the rest of their lives. Students should be allowed to explore their interests and know their goals better than anyone else. Thus, students’ opinions on this matter the most. Sometimes parents need to back off a bit and let their children make their own decisions. After all, it is their life, and they are the ones who should get the final say.

Some may argue that without as much parent involvement, students will not have as good of a performance, especially in school. However this is not entirely true. According to the research of Keith Robinson and Angel L. Harris, authors of “Parent Involvement is Overrated,” for New York Times, “There were more instances in which children had higher levels of achievement when their parents were less involved than there were among those whose parents were more involved.”

In athletics as well, parents shouldn’t be too overbearing. Too much parent involvement when so much pressure is put on student athletes makes the experience less enjoyable. Only a very small percentage of high school students will move on to play in college or become professionals, so the high school experiences they have should be for fun. Some parents need to back off a bit and let their kids enjoy the sport and learn to excel achieve of their own goals.

High school is both a time for students to become more independent and the last few years of their childhood. This time is when students start making their own decisions while still having fun. Parents can still guide their children and be involved, but there is such a thing as too much.