When is a prank not a prank?

This is the question on many people’s minds in response to the now-infamous YouTuber, Sam Pepper, posting a video in which he “pranked” random women on the street. In the video, he distracted various girls by asking for directions to a cafe and then pinched their butts when they weren’t looking, all of which was discreetly filmed by an assitant nearby. The video was taken down soon after being posted, but not before reaching 1.3 million views. 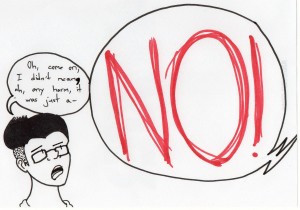 Viewers are tired of seeing what seems to be sexual harassment in Sam Pepper’s prank videos.

In case you were unaware of his Internet presence, Sam Pepper is a 25 year-old British YouTube star with over 2 million subscribers. His trademark videos are street interviews and pranks, where he asks random people various personal questions and pulls off controversial pranks of all sorts. And apparently, this particular prank video was nothing new for him. While plenty of his videos are harmless and even feel-good, there are also plenty that are very invasive or creepy, such as handcuffing girls on the street and refusing to release them unless they kiss him, or getting girls phone numbers by insisting they’ve met before until the girl eventually “remembers” him and agrees to text him.

However, none of his videos to date have sparked as much outcry as this one. It’s clear this “prank” went one step too far. There’s no doubt that his advances were unsolicited and totally inappropriate. Supporters of Sam argue that it wasn’t an issue because some of the girls in the video seemed to laugh it off. But in the original video, one clearly said she didn’t like it, and all the girls seemed uneasy, looking around for the perpetrator, before he eventually revealed how he had tricked them. Even if the prank hadn’t been publicized, it wouldn’t have been unacceptable. But by putting it on Youtube, the offense became unquestionably worse, sending a message to literally millions of people, primarily young girls, that sexual harassment of women is normal, funny, and should be treated as “a joke.”

So, when is a prank not a prank? A prank that violates people’s bodies, puts people in danger, or harms the property of others crosses the line in my book. A prank should be harmless, and once it’s over, the person being pranked should be able to see the humor and fun in it as well.

This blatant example of sexual harassment masquerading as humor has gone too far, and it’s about time the world took notice. Supporting youtubers, viners, and others who use women or harassment as the punchline for their videos only shows them it’s okay for them to continue. By making people like these face the consequences of their actions, the world will be filled with more reverse pick-pocketing and toothpaste-oreo centers pranks, I’m sure of it.