It’s been a couple weeks since its release, and Super Smash Bros. for 3DS, the newest entry in video game company Nintendo’s crossover fighting franchise, has proven itself to be just as much of a hit as its predecessors. Just a week ago, Nintendo announced that the game had sold a smashing 2.8 million copies worldwide since its launch, according to gaming news site Polygon. Many of these copies are already owned by Conant students, eager to fight their friends with their favorite Nintendo characters.

So What Is Smash?

Super Smash Bros. is a unique fighting game. Many classic fighting video games, like Street Fighter and Tekken, have the player trying to get their opponent’s health bar down to zero before the player’s own health bar is depleted. These games also have the fighting ground typically be a flat ground with no hills or ledges. Smash, on the other hand, gives the player a percentage point value that measures their character’s damage taken. Taking hits, especially at higher levels of damage, can send you flying, and the main objective is to hit your opponent so far they fly off the screen. This makes for a fast-paced, frantic game where you must pay careful attention to damage being taken by both sides. 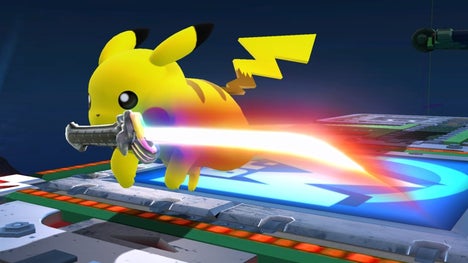 This already strange setup is made even more chaotically fun when the game starts to drop random items into your smackdown. These items come from a variety of Nintendo franchises, but some are unique to Smash. All sorts of helpful or harmful objects may pop up suddenly in your matches. A paper fan, a lightsaber, a powerful bomb, or even the Poke Balls of the Pokémon series could be thrown into the fray. The game’s battle stages also add complexity to the brawls. They often have multiple platforms, dangerous cliffs, and the occasional go karts trying to run you over, making the game just as much about where you jump and step as it is about how much damage you can do to your opponent. 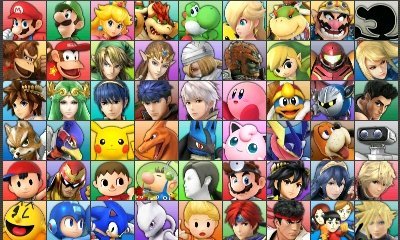 Of course, the best thing about Super Smash Bros., for Nintendo fans especially, is the number of characters you can play as. There is a grand total of fifty-one fighters playable in the game, a huge number even in the fighting game world. The characters represented include the familiar faces of Mario, Link, and Pikachu, but also include everything from a stoic bounty hunter to a cute little boy with dangerous psychic powers. Even a dog is a playable character. SEGA’s Sonic the Hedgehog and Capcom’s Mega Man make guest appearances, and the player can even put their own customizable Mii characters into the game. This odd and varied cast is a huge part of why the Smash series is so fun to play.

How to Get Started

If you haven’t yet, it’s highly recommended that you pick up Super Smash Bros. for 3DS. Even if you’ve never played a game in the series before, this newest installment makes it easy for newcomers to jump right in and play. We even have some tips to get you started!

1. Play through Classic Mode! This mode has you complete a series of challenges as a certain Smash character, which can range from a simple one-on-one fight to a battle with two computer-controlled companions against a giant character. It all culminates in a battle with the sinister Master Hand, who is, quite literally, a giant hand. Completing the challenges and the fight with Master Hand earns you great rewards. You can even choose how difficult you want Classic Mode to be at the beginning. It’s a great way to get useful items as well as test your skills. Classic Mode can be found by selecting the Games and More option on the game’s main menu, then selecting the Solo option.

2. Use Training Mode! The playable characters in Smash vary wildly in strengths, weaknesses, and attacks. Training Mode allows you to test these characters out and see which style of play best suits you. Do you want a quick character like Zero Suit Samus or Sonic, a powerful one like Bowser or Ike, or a balanced one like Mario? This mode can show you what works and what doesn’t for your character, as well as letting you experiment with their numerous moves. It can also be found be selecting Games and More, then selecting Solo.

3. Gather some equipment! For the first time in the series, players can customize characters with special equipment. This equipment can alter your character’s speed, strength, and defense. Boosting speed will make movement and attacks faster, boosting strength will make attacks stronger, and boosting defense will make it more difficult for opponents to send you flying. With the right equipment combination, even a character like the heavy and slow Ganondorf could be turned into a dangerously fast fighter. Equipment can be found by completing challenges in Classic Mode, or by turning on the 3DS Streetpass function and playing a minigame.

4. Know your moves! Each character has their own unique moves to use in combat, and remembering what each one does is vital to doing well. Aerial attacks are great for hitting opponents in the air, smash attacks are good for sending characters flying, and special moves often have great range and damage output. Knowing how to trigger each move, and when to use them, will set you on the way to becoming a great Smasher.

5. Find other players! Smash is best played with a friend or three instead of a computer opponent. The game supports up to four players, which can make for a very frantic and fun match. After all, how better to learn how to be a great player than by playing against other ones?

Hopefully, these tips can start even the greenest player on the path to growing skilled at the game. But above all, the most important thing is that it’s just a game. You may lose some matches and win others, but, cliché as it is, the best part is the silly fun you’ll have just playing the game. Happy Smashing!