The Crier Wants to Know: how is Kamala Harris becoming the first female Vice President significant to you?

“By becoming the first female Vice President, Kamala Harris has set a course for the rest of history. She is living proof for me and millions of other girls and women all over the nation that we too can accomplish whatever we set our minds to. Our race or ethnicity does not stand in the way of achieving our dreams. These are words that have not been possible to say for hundreds of years. Now, I along with many others say it with confidence and passion.”

“Making history as being elected the first woman and that too of color, Kamala Harris has broken significant barriers for women in politics. In the past few years, we have started to see some women enter into roles of power on the professional front. But never has a position like the Vice President seemed like a tangible seat that women could hold. As a young woman of color myself, seeing Harris’s inauguration gives me hope for the future of women in politics. Having an equal say in our country’s foundation, the government, is essential for our country’s growth, and it’s a reform that’s been a long time coming. For me, Harris has warranted young girls to dream big and made them understand that political success is not a distant dream, but in fact, an achievable goal.”

“Kamala Harris being elected for vice president was so amazing to see because she is the very first woman vice president. This is such a momentous occasion and I know she will accomplish great things.”

“When Kamala Harris became Vice President of the United States, as the first female VP in this nation’s history, for adolescent girls like myself it truly feels like a weight has been lifted off our shoulders. While some men may be able to comprehend situations women face such as abortion, gender equality, and other significant issues, they will never know what it feels like to be in those situations. I feel truly represented and heard for the first time in this nation, and it feels like a new and brighter day in the US.”

“What made Kamala Harris becoming the first Vice President be something that is so significant to me is having that representation. Not only from the perspective of someone that’s a woman but from someone that knows and understands what it’s like being a person of color in America. Finally, we have someone in office that knows the little things like what it’s like to be made fun of for bringing Indian food to school or having oil in our hair. Whether it’s issues big or small, having someone in office that knows what it’s like and understands our perspectives just gives me confidence that our experiences will be accounted for in making decisions for the better of our society and that potentially, America can extend that possibility for other people of color like me one day.” 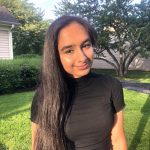 “Madam Vice President Kamala Harris’ veneration for the sacrifices of those who paved her way provides an impeccably refreshing juxtaposition with the arrogant and entitled figures of America’s former presidential administration. I profoundly resonate with the generational resilience not only prevalent in her story but intrinsically intertwined with that of my family as a first-generation born and raised American citizen. The remarkability of Kamala Harris’ political endeavors renewed my hope— a desire to build a system derived from equity is not only a possibility, but an obligation for those committed to our government of the people, for the people, and by the people.”

“Regardless of partisan politics, I can appreciate the fact that we have a female in the White House who proudly represents historically under-represented voices within the United States. It will be interesting to see what evolves out of the new administration, as Biden has the most diverse cabinet in Presidential history. We will see how the American voter receives the proposed agendas of Kamala Harris and rest of the presidential cabinet. For some Americans, the message is too progressive, for others, a necessary step in the direction to heal.”

Minnah Saif is a Crier social media editor and a junior at Conant. This is her second year on the Crier staff. At Conant, Minnah is part of HOSA and the PRIDE program. Outside of school, Minnah likes baking, shopping, and watching Grey’s Anatomy.