They’re not transformers, but they are self-driving 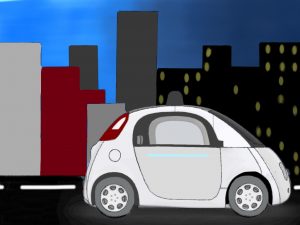 The future is now. While our cars aren’t transforming or flying, they are beginning to drive themselves. Just a decade ago self-driving cars seemed like a concept only seen in sci-fi movies. Today, these prototype driverless cars will soon bring lots of benefits and a new era of transportation.

Some may argue that nothing would change except there’s no driver. While, beta models are not developed enough to be “hands off”, the technology will only get better over time. A majority of road accidents are caused by human error, according to Auto Insurance Center. A decline in accidents means a decline in traffic, injuries, and deaths.

Self-driving cars are a work-in-progress and while they still need the participation of someone behind the wheel, we are getting closer to developing an electronic chauffeur. Being able to travel without having to control the car means time to get things done during the commute. In an article published by Forbes, Adam Ozimek calculates time spent just driving saying, “The next major source of savings is that time spent in the car will be free to do stuff other than driving. This is a huge deal if you consider how much time people spend in cars. In the last 12 months to August, we traveled an estimate 2.9 trillion vehicle miles in our cars. That’s almost 10,000 miles per person in the U.S. per year. If we extremely conservatively assume that the average travel speed is 60 miles per hour, and that each vehicle holds one person, this translates to around 49.6 billion hours spent in the car, or 157 hours per person in the U.S. per year.” That is a lot of free time people can use to get ready, eat breakfast, do work, or just relax before their destination. Not only does that make travel more convenient for able-bodied individuals, but this means people who were previously unable to drive because of injuries or disabilities can now travel much more conveniently.

Cars enthusiasts may be less inclined to assimilate to this new era of automobiles. However, self-driving cars will allow recreational drivers to enjoy their cars much more. When the automobile replaced the horse, they became a hobby instead of transportation. People ride and race them for fun. When self-driving cars become a majority, people will still have regular cars for weekend fun and motorsports. They will no longer be needed for commute but instead purely dedicated for entertainment.

A new era of self-driven cars and alternative fuel is coming fast, but that doesn’t mean the death of traditional automobile. Don’t be afraid of change. Embrace a new technology that could benefit millions. It’s not perfect, but neither was the first car.