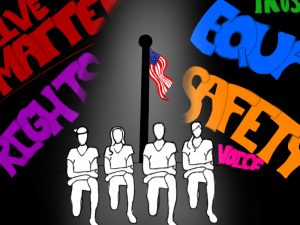 Since 1916, before every sports game, spectators and players are asked to “please rise, remove your hats, and join us in singing our national anthem.” For almost 100 years, everyone complied to these requests without hesitation and respected the country as one big unit. But recently, many athletes have started to protest the national anthem by kneeling or even sitting down instead of standing.

These protests all started when San Francisco 49ers’s quarterback Colin Kaepernick refused to stand for the national anthem during a preseason game. According to NFL.com, when asked why he was protesting, Kaepernick replied, “I am not going to stand up to show pride in a flag for a country that oppresses black people and people of color. To me, this is bigger than football and it would be selfish on my part to look the other way. There are bodies in the street and people getting paid leave and getting away with murder.”

Citizens of the United States are showing two very different opinions of these protests. These opinions are obviously clash, as arguments and confrontations continue to arise. But what people fail to notice is that arguing and bickering won’t accomplish anything. To move forward and progress as a country, citizens have to compromise and meet the opinions in the middle. If you can’t look past your own opinion, you are blind to change.

There are two types of people who are currently blinded by their opinion. First, there are the supporters of these protests. They are fighting for civil rights because they see the United States as a place that supports oppression and discrimination against minorities, and they believe these protests will spur a change in the country.

Then on the other side, there are those opposed to these protests. They view the protests as not only disrespectful to the people of the country, but also to the country itself. They believe that these protests show the disloyalty of these people to the United States, while also not dishonoring the soldiers who are fighting, or have fallen while protecting and defending our country.

I believe the ignorance and blindness must be lifted, and the opinions must be met in the middle. While these protests are for a great cause and should be supported, they need to take place in a different setting. It’s very difficult to demand respect from a country while at the same time disrespecting the country.

There’s multiple ways these people can compromise. First off, the protests can take place in a different setting. For example, protests at sporting events can continue, just not during the national anthem. If famous athletes really wanted to be effective in their protest, they could bring them to interviews or social media to make sure that millions see it and join them in their protests. If the protests stop being seen as disrespectful, they may become more effective and those originally opposed to the protests might reconsider their disapproval.

Also, the opponents of protests must also put themselves in the shoes of the oppressed to understand where these protests are coming from.  I believe that if they do that, their opinion of the protests will change, and they will slowly begin to support and encourage them.

If these opposite opinions continue to clash, change cannot be made. Progress and peace will continue to evade humanity if compromises cannot be achieved. That is why the middle opinion, that the protests are a good catalyst for civil rights, but need to take place in a different setting, is the best and only way to end the disputes and unite the population.