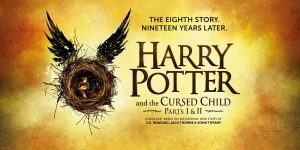 The latest installation in J.K. Rowling’s ever-growing franchise, “Harry Potter and the Cursed Child,” was released on July 31, to the delight of millions of fans and the confusion of millions of people who thought the series ended in 2007.

The new book is significantly different than the original seven novels Rowling released. First of all, the product is not a novel, but rather, the script for a wildly successful play that is currently being performed in London. Rowling collaborated with coauthors Jack Thorne and John Tiffany, though it was Thorne who is credited with writing the script, and Rowling’s exact level of involvement is unclear. Both of these points have been sources of disappointment for many fervent fans.

The script, by nature, is not nearly as immersive to read as a novel, as it is mainly dialogue with frankly quite minimal staging directions. This makes scenes difficult to imagine, and the whimsy of the wizarding world falls a bit flat without Rowling’s usual rich imagery.
The dialogue is also hit-and-miss. While there are some extremely funny lines as Ron predictably brings plenty of comic relief, there are also parts that feel awkward and stilted to read. It’s likely these parts would flow naturally during a live performance, though.

Additionally, the wizarding world we find in “Harry Potter and the Cursed Child” has changed since we last left it in “Harry Potter and the Deathly Hallows.” It begins 19 years after Harry finishes his seventh year at Hogwarts, as he sends his second son, Albus, to Hogwarts for the first time, and the story revolves around the father-son duo. However, those who hoped Harry would live in peaceful familial bliss are in for an unpleasant surprise. Albus and Harry have a very difficult relationship, and this emotional tension drives the conflict, rather than a fight between good and evil.

Due to the format of the story, it is very focused. In interviews and on her website, Rowling has periodically revealed snippets about the future lives of many characters in the series, but “Harry Potter and the Cursed Child” does very little to elaborate on these stories. This is a shame because it leaves many of the questions readers may have had after the final book unanswered.

However, despite everything going against it, the charm of Rowling’s wonderful characters and fantasy world make the story ultimately irresistible for fans to read. For a few blissful hours, it gives readers something they haven’t had in years- the magic of reading an entirely new story with the characters they already love. For this reason alone, any fan of the Harry Potter books should go ahead and read it. You probably won’t love “Harry Potter and the Cursed Child” as much the original series, but it’s still good enough to make you stay up late to finish it, so really, what more could you ask for?