“Spider-Man: Homecoming” proves to be a refreshing reboot 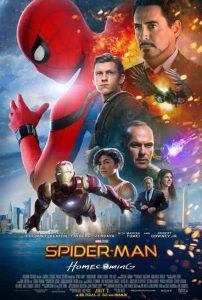 The latest Spider-Man movie set in the Marvel Cinematic Universe is a welcome addition to the franchise.

One of the most beloved superheroes is back in Marvel’s reboot of Spider-Man, this time as a high school sophomore.

“Spider-Man: Homecoming” is a light-hearted action movie that revolves around a 15-year-old Peter Parker (Tom Holland) as he digs more into his newfound relationship with the Avengers (as seen in his cameo in “Captain America: Civil War”) with the help of Tony Stark (Robert Downey Jr.), all while struggling with the typical high school obstacles.

Marvel does an excellent job of winding “Spider-Man” into the Marvel Cinematic Universe and differentiating it from the Sony Universe in which the previous movies were made. Throughout the movie, there are constant references to the fact that Spider-Man takes place in the Marvel Universe, such as Captain America being in the fitness training video. It is also interesting to see Tony Stark’s character as a mentor figure rather than a protagonist, as he is in most Marvel movies.

Peter Parker has a more innocent character since this movie is also a coming-of-age story as well as a Marvel action movie. It’s satisfying to have more of a light-hearted outlook on the Spider-Man story, and this is smartly achieved by making Peter an innocent sophomore. The previous movies displayed a matured Peter, whereas the Marvel Spider-Man starts off with a naive Peter as he attempts to balance teenage ordeals like having a crush with his Spider-Man abilities and his responsibilities involved with it.

At times when the movie starts to drag, the villain of the movie, Vulture (Michael Keaton), brings multiple twists. The Vulture takes the movie down a more interesting path due to his surprising background.

Like every other teen movie out there, “Homecoming” has its fair share of cliches. There is the dreamy high school crush, the nerdy best friend, and the adults who take the kid for granted and don’t realize his potential right away. Although it does make the movie predictable at times, the familiar high school experience juxtaposed with the superhero context adds a new twist to the tropes.

For the first time, Spider-Man even looks like a 15-year-old high school student rather than the obviously-too-old previous two actors who portrayed a teenager, Tobey Maguire and Andrew Garfield. Having a younger cast as a whole is a nice change that creates a more realistic feel to the film. Not only is the cast age-appropriate, but it is diverse as well, with Zendaya (Michelle), Laura Harrier (Liz), Jacob Batalon (Ned), and a brief appearance from Donald Glover.

Overall, it is refreshing to have Marvel combine a coming-of-age story with the usual superhero action. Hopefully Marvel continues to develop Spider-Man’s character as a loveable teenage superhero when he appears in “Avengers: Infinity War” next year, and in any future installments.