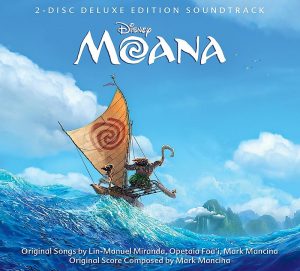 The “Moana” deluxe soundtrack offers the great music you may already know and love from the movie, as well as bonus outtakes by Lin Manuel Miranda.

It’s been three years since Disney’s “Frozen” hit the big screens and captured the hearts of millions of kids and adults alike. No one could get the hit track “Let It Go” out of their heads then, and now Disney is at it again with another sensational movie and soundtrack, “Moana.”

The movie is about an adventurous teenage girl named Moana who lives on a tropical island with her people and is next in line to become the chief. Despite her parents warnings not to wander outside the island, Moana sets sail on a quest to help her people and discovers her own identity along the way.

The story of a young girl finding her way in the world is hardly a unique Disney tale, but the soundtrack offers something new and fresh for listeners despite the movie’s similarities to predecessors.

The most iconic tracks on the album include “Where You Are”, “How Far I’ll Go”,“We Know the Way”,“You’re Welcome”, “Shiny” and “I Am Moana (Song of the Ancestors).”

The songs “Where You Are” and “We Know the Way” are the album’s most family-oriented numbers. “Where You Are” is a typical and lighthearted Disney song that sets up one of the main conflicts of the movie. In the song, Moana’s parents and fellow islanders urge her to stay home on the island despite her desires to leave. While “We Know the Way” is also about family, it conveys a different message. It’s about Moana’s ancestors who used to be voyagers that explored the world beyond their island homes on their boats. It’s an energizing song about being wise and aware of the world around you. The music is beautifully composed, with parts of the lyrics in both English and Tokelau, a language from the New Zealand island Tokelau.

“How Far I’ll Go” is about Moana’s conflict of wanting to explore life outside of her island but at the same time is trying to hold herself back and heed her family’s words. It’s a melodic song that really highlights the beautiful voice of Moana’s actress, Auli’i Cravalho. It’s perfect for anyone who has an intense desire to travel and explore. “I Am Moana (Song of the Ancestors)” ties back to “How Far I’ll Go” because it offers a resolution to Moana’s earlier conflict. It’s a confident but sweet song about Moana realizing and accepting her true identity in the face of doubt.

While a lot of the songs are sentimental and sweet, the songs “You’re Welcome” and “Shiny” are a bit different from the classic Disney-style songs. “You’re Welcome” is a silly song about the demigod character Maui bragging about himself and his many accomplishments. In “Shiny”, a crab antagonist named Tamatoa takes the floor. In this smooth song, Tamatoa ridiculously 0ver-glamorizes himself because of how shiny and pretty he is. Lyrics like “Oh, also I lassoed the sun you’re welcome!” from “You’re Welcome” and “Shiny watch me dazzle like a diamond in the rough!” from “Shiny” add to the catchiness and comedy of each song.

All of these songs are included with another thirty plus songs on the original album. The deluxe version of the album costs around $13. It’s worth getting the upgrade because it offers another nineteen songs, including outtakes performed by one of the songwriters of “Moana,” Lin-Manuel Miranda, the creator of the hit musical “Hamilton.”

Whether you’re a Disney fanatic or not, the “Moana” soundtrack is an album worth a listen. Even if you haven’t seen the movie, the songs alone tell the beautiful and vibrant story well on its own.