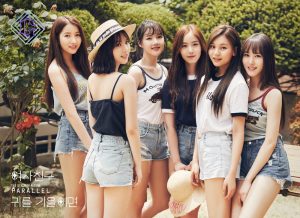 여자친구, the Korean name for GFriend, translates to GirlFriend. However, GFriend’s Leader Sowon once explained, “we want to be good friends to girls and a girlfriend-like friend to boys.” By creating a pun out of the word, GFriend creates an ambiguous reputation for themselves and their songs. This gives GFriend a distinctive style so they can effectively reach two audience at once.

On Aug. 8, South Korean music channel SBS MTV aired an episode “The Show,” presenting the first win of GFriend’s single “Love Whisper.” Love is introduced in “Love Whisper” in an ambiguous manner. While love is often viewed in a romantic sense, GFriend lives up to expectations by simultaneously representing both romantic and platonic relationships in this song.

The second song in the album, “Love Whisper,” highlights the fond memories that both friends and lovers can make and long to experience once more. The song is both easy to relate to and difficult to stop listening to. It is, however, unfortunate that the language is in Korean, and there has not been an English version yet released.

Before their latest comeback, GFriend has followed the cliched concept of pure, cute girls that many South Korean girl groups replicate. However, their latest single “Fingertip” introduced a funky, electrical concept most K-pop groups wouldn’t dare to attempt. Fans were anxious to find out if GFriend had finally graduated from their cliched concept, but “Parallel” has proven otherwise. Instead, “Parallel” has improved GFriend’s concept to an enhanced sense of mature purity with explosive, complex choreographies.

Starting from the very first song “Intro (Belief),” transitions between the songs were smooth and quick thanks to the combination of similar synthetic beats, delicate chimes, and soft drums. Due to the delicate, spring-like tune, the songs are easy to the ears and can even be used to lull a listener to sleep. However, with addictive choruses in the album, the songs are energetic enough to dance to or subconsciously nod along to the rhythm.

Coming from a small company, GFriend has risen from nothing to a girl group that South Korea cherishes. With “Parallel,” the group has clearly defined their niche in the landscape of Korean girl bands.