The evolution of Disney princesses 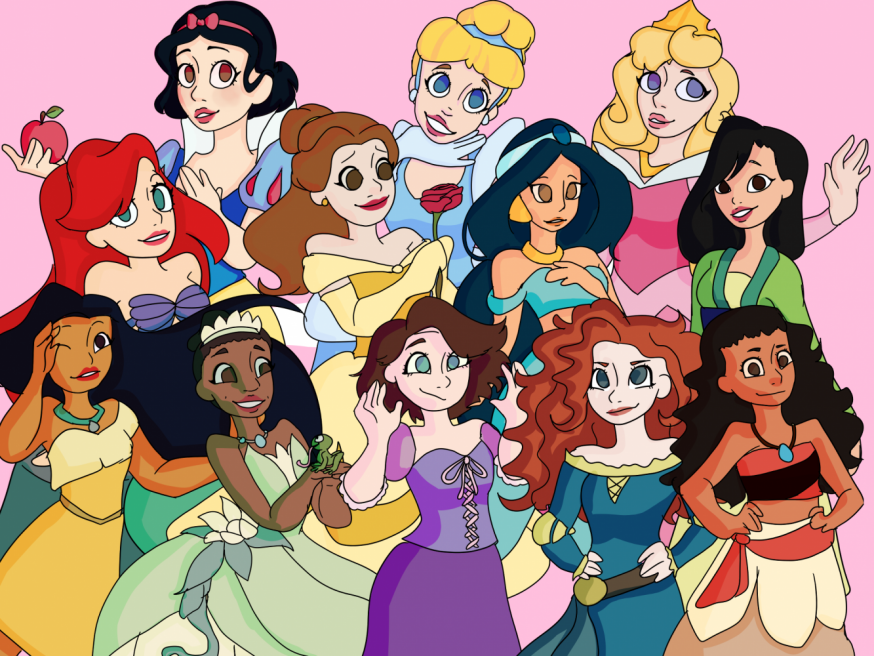 With the popularity of Disney+, Disney’s new streaming platform, people have been feeling nostalgic about their favorite Disney characters. Personally, I couldn’t help but think about the iconic Disney princesses. After scrolling through the Disney archives, I’ve come to realize that what being a Disney “princess” means has changed over time.

Snow White is the typical princess: beautiful and kind. However, she doesn’t have much besides being the “fairest of them all.” Unfortunately, Snow White doesn’t do much in the movie but clean up for seven guys and gets saved by another one. She doesn’t take much initiative as a princess, but this is probably because she was a product of her time. Regardless, gender roles run rampant in this film.

Cinderella improves, as she possesses a more developed sense of character. Her desire to explore the world comes out of curiosity, not a man. However, like Snow White, she doesn’t take much initiative in the film, and in the end, the prince is the one to save the day. Basically, “the big, strong, man” trope still ends up saving the princess, and they get married. Here, Disney continues to imply that beauty is a woman’s best trait.

Disney seems to regress a bit when it comes to Aurora. The fairies in “Sleeping Beauty” don’t even give Aurora a reasonable gift like brains or a personality, but instead they give her only beauty and grace instead. Aurora lacks character depth, as she was asleep for basically half of the movie, and viewers barely got to see what Aurora was like beneath her skin.

Disney finally establishes a complex character when it comes to Ariel. Ariel has the best singing voice out of all of her sisters, as she is always the star at her father’s concerts. However, Ariel wants more than her life underwater: she wants to live life on land. After catching a glimpse of the prince, Eric, Ariel yearns to be human more than ever. Here, Ariel still wants to explore the outside world; however, she gives up a component of herself in the pursuit of romance. I think this is the one of the first movies where the princess fights for herself: Ariel stands up against her father, her society, and the villain, Ursula, throughout the film.

Belle starts a new era of Disney princesses: she is an intelligent young girl who doesn’t fit society’s standards. She even dedicates an entire song about her desire to break away from society and its impositions. Even though Belle is still traditionally beautiful, her looks don’t play much of a role in “The Beauty and the Beast” besides attracting Gaston, the egotistical villain. Belle also searches for much more than a good-looking man, as she falls for an “ugly” beast who she discovers is kind at heart.

Jasmine continues the trend of a strong female role model as she resists society’s expectations of marrying for political power. Aladdin, Jasmine’s prince, says that while Jasmine is very beautiful, she is also smart, which is rare in Disney movies thus far. Disney extended on the subtle feminist attitudes present in the animated version to the 2019 adaption of “Aladdin,” where Jasmine, played by Naomi Scott, takes on a more ambitious role. In the original movie, Jasmine’s father lets her break the rules and allows her to marry whoever she wants, and her husband becomes the sultan. In 2019, Jasmine’s father breaks the rules to let her become the first female sultan with a male consort.

Pochahontas is a free-spirited young girl who relieves tensions between her Native American tribe and the English settlers. Although Pochahontas fears being wed to Kokoum, the boring but brave warrior, she instantly falls in love with English settler John Smith. However, the whole movie revolves around their relationship, instead of Pochahontas’ leadership abilities. This challenges previous movie improvements, but Pochahontas is still one of the first princesses to be the actual heroine of the movie.

Mulan is arguably the coolest princess: she’s strong, brave, and the best fighter in an all-male army. Mulan defies all expectations put on her, as she helps her father by enlisting in the military by cross-dressing as a guy. She saves China and defeats the Huns, all in a rigidly patriarchal society. Mulan shows everyone that women don’t have to be prim and proper and that they are capable of running an army. Mulan’s love interest is also more of a subplot in this movie, making strides for Disney’s female characters.

Tiana is another strong-willed, ambitious, talented, and driven Disney princess. She told her father that she would create a restaurant before she dies, and to fulfill her father’s dream, she is willing to do anything to get there. Tiana also wants no distractions, and when prince Navine shows up, she doesn’t swoon like all the other girls in town. Tiana is also Disney’s first black princess! Set in 1920’s New Orleans, the film initially establishes a distinction between the black and white communities; however, the whole film does not focus on race relations but instead highlights parts of African-American culture and the drive of the black community. “The Princess and the Frog” focuses more on modern society, showing young kids that following your dreams involves a series of setbacks that are ultimately worth it in the end.

Rapunzel is a headstrong girl who was kidnapped at a young age and has spent her whole life locked up in a tall tower. Rapunzel is a resourceful princess, making paints out of the clutter in her house and using a frying pan as a weapon when Eugene barges in. She shows determination when she shows Mother Gothel that she can handle what the world has in store for her, and she sneaks out with Eugene. However, even with Eugene, Rapunzel doesn’t heed to his warning and uses her own instincts–and handy frying pan–to navigate the world instead. Rapunzel shows that she is strong enough to face the outside world, opposing the belief that women are weak and helpless.

Merida constantly feuds with her mother because she lacks a lady-like poise that a princess is supposed to possess. Merida’s movie’s central conflict lies in Merida refusing to get married, and even wins her own hand in an archery battle. Merida ends up being the first Disney princess without a male counterpart, signifying the future of strong, single female leads and the growing independence and changing roles of women.

Elsa breaks off ties with her kingdom and isolates herself in “Frozen,” showing her headstrong and independent personality, while Anna’s portrayal is more bubbly and energetic. Elsa doesn’t find a love interest, and while Anna finds a connection with Kristoff, her romantic relationship has little significance in “Frozen.”

Disney has been careful about calling Moana a princess, and they classify her as a heroine. Moana teaches herself how to sail and restores the heart of Te Fiti, all with little help from the demigod, Maui. Moana also goes the natural beauty route, with minimal makeup and normal proportions, unlike all of the previous princesses with unrealistic waistlines and dolled-up makeup.