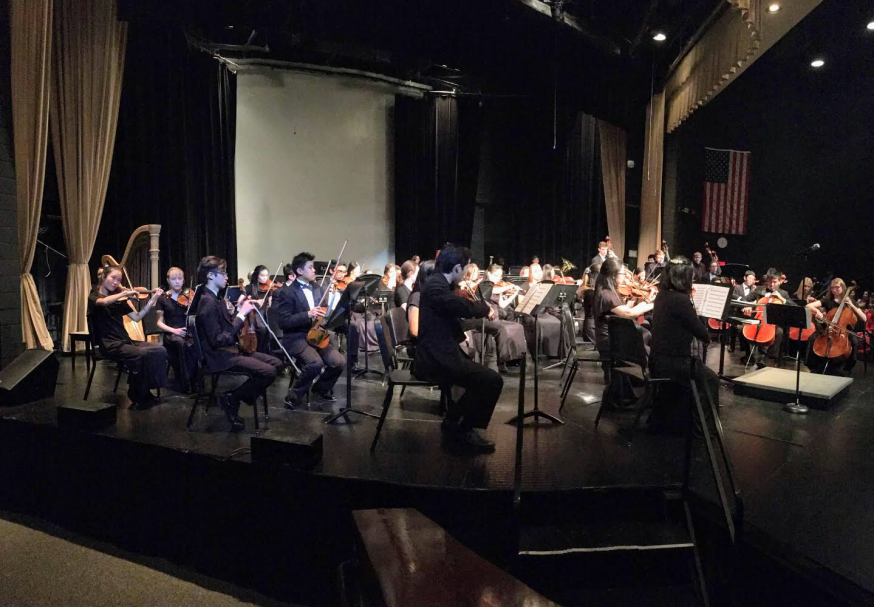 The Feb. 9 District 211 Honors Orchestra Concert at Schaumburg High School, directed by renowned conductor and Music Director of Millikin-Decatur Symphony Orchestra Sergey Bogza, included top musicians from all over the district. The orchestra performed enjoyable, informative, and unique music, and the night served as a reminder of the value of music education.

This concert was unique because many students in the audience, including myself, were familiar with the conductor, as he guest conducted orchestra class at Conant High School earlier this winter. We got to see the work and vision of a meticulous conductor who we previously learned from come to life.

The concert lasted approximately forty-five minutes, quite shorter than the average ninety minute program, and contained an appropriate amount of three compositions. The first piece performed by the orchestra was “Romeo and Juliet, Overture-Fantasy” by Tchaikovsky. The beginning of the piece featured a dramatic and vibrato-heavy entrance from the violins, creating a suspenseful tone and foreshadowing a future conflict. The piece also introduced a harp, which provided a soothing sound amidst all the sadness.

Overall, I was impressed with how each section conveyed a separate emotion, such as the grim emotions conveyed by the cellos and chaotic emotions by the chin fiddles, and how quickly they could transition between feelings of madness to harmony. These emotions demonstrated the passion and strength of each musician and highlighted that a group of musicians who are collectively motivated and passionate about their music can produce an incredible sound, leaving the audience–including me–wanting more.

The next composition, “Nimrod from The Enigma Variation,” was composed by Edward Elgar. This piece consisted of a legato style and was mostly tranquil throughout. The slower tempo of the second piece allowed the orchestra to showcase their intonation and ability to play with coherence. The orchestra did a tremendous job of playing accurate intonation, but compared to last year’s performance, they were not as together as they could have been. It was evident that the orchestra relied on larger sections to carry them through the piece. Nonetheless, the overall sound of the orchestra conveyed feelings of optimism, triumph, and peace.

The final piece of the concert was “Danzon No. 2,” arranged by Arturo Marquez. This piece was much more energetic and upbeat compared to the fiery and melodic style of the other songs. The addition of the trumpets, piano, and percussion added a previously missing lively and jazzy component. I liked how all of the pieces were unique from each other but still seemed to complement one another, as if they were all parts of one big story filled with various emotions.

The final piece also featured a solo performance from Makiba Kurita, concertmaster and junior violinist from Conant High School. Her solo commanded the stage as she used emphatic bow strokes, utilized legato style, and played with such expertise. Another interesting moment was when a member of the winds put her clarinet down, picked up a flute, and played a solo. This was incredibly fascinating because playing a solo requires tremendous attention to detail, and she accomplished this challenge with two different instruments.

The musicians’ performance was exquisite, and I admire their dedication and efforts.