Gymnast overcomes hardship to compete for her team

The injuries were devastating. Muscle damage. A concussion. Bruising pain. Cuts requiring over 60 stitches. For anyone, the recovery from these injuries can take months, and for an athlete, it usually costs them their season. However, one gymnast persevered through the hardship and recovery in order for her to compete again and to accomplish what the team couldn’t do without her.

On the second day of the girls’ gymnastics season, a friend was driving Julia Betts, ‘20, to school. The car went through an intersection and hit a pole, causing the multiple injuries for Betts.

“We just figured it would be a normal day, but then it happened,” Betts said. “My first thought, obviously, wasn’t about gymnastics, but just getting to the hospital and stuff. I didn’t really think about gymnastics until I was out of the hospital.” 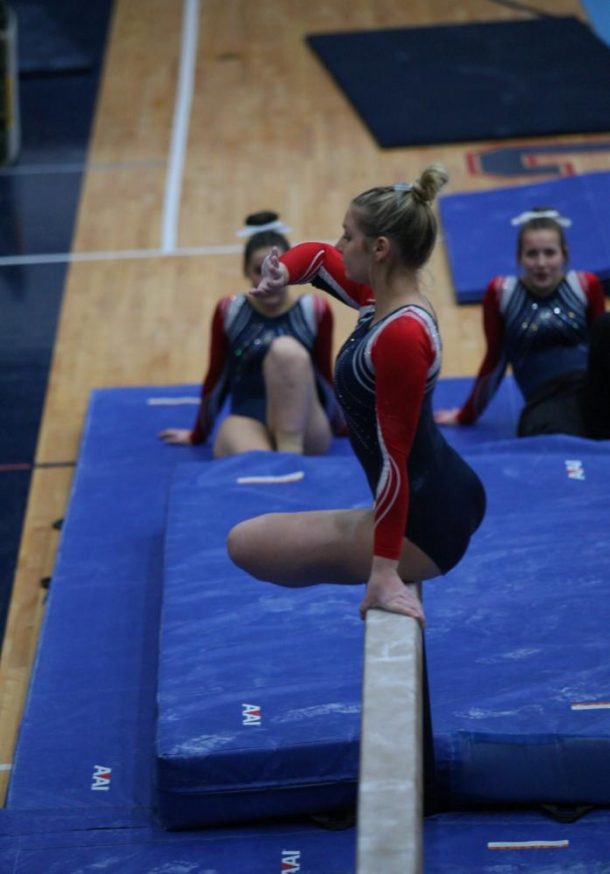 Despite a serious car accident at the beginning of the season, Julia Betts, ’20, persevered to come back after just two months of recovery time.

After learning about the accident, head coach Anthony Avella recalled, “I remember not caring about the season, about our scores, any of that stuff. I just wanted to make sure she was okay at that point.”

The thoughts remained the same for Avella after he saw Betts for the first time after the injury. “Her arm was in a sling. [I was] just thinking, man, I was just hoping that she was able to use her arm like she was used to, [that] she still is  able to do the the things she was able to do before the accident. I’m not talking about gymnastics, I’m talking about daily [activites]. It was hard to see her like that because she was pretty banged up,” Avella said.

“I went to the doctors and they told me that I wouldn’t be able to do gymnastics for the whole season, probably for a while, just because of the healing, the wounds, and then the muscle damage. But I really didn’t like that,” Betts said, “so I went to an orthopedic [doctor] so I could start doing exercises like physical therapy.

“Then my plan was just to try to heal it so I could at least do something for the season, even if it was just one meet,” she said. “I had worked so hard during the offseason that I didn’t want to just not do anything to help the team or for myself.”

The team greatly support her in her efforts. Teammate Julia Grzeslik, ‘20, said, “I feel like we all really pulled together and we knew it was hard because we’ve all battled with injuries. So we understand what it was like coming back and we all knew she was really excited about the season.”

Betts said, “They supported me by telling me it was okay to take my time coming back because we all know if you rush in from an injury it can just make things worse. And whenever I was feeling down about something they still helped me feel better.”

Contrary to the news she received from doctors after the injuries, Betts returned to the floor on Jan. 5 at an invitational at Lake Forest, just two months after sustaining her injuries.

Betts competed in just one event that day, the balance beam. Avella said, “She wasn’t doing all of her difficulty in that routine because her body did not simply allow that because she was in quite a bit of pain. The goal for that meet was to stay on, stay on the beam [and] just get a competition under your belt this season.”

“It was more to just get the confidence back,” Betts said. “It was nerve wracking, but it wasn’t horrible because I’m really used to competing and I was just happy to be doing something.”

The event went well for Betts. “If I remember correctly, her score ended up counting for our team score. I was happy for her,” Avella said.

On Feb. 1, the team had their Regional meet at Maine South, and Betts finished in fourth place on the balance beam and helped her team qualify as an at-large advancer to Sectionals.

“I just gave it everything I could so that I could contribute my scores, and they helped, so that was good,” Betts said.

“By the time the state series rolled around,” Avella said, “she was competing all-around for us. I think that this not only motivated her but it motivated the other girls, too.”

“She is definitely is really positive,” Grzeslik said. “Being in the gym, she is really happy all the time. Even when she is frustrated, she is helping people, making sure they’re not down about themselves.”

On Feb. 7, the team had their Sectional meet at Conant. Betts competed but didn’t qualify for State. Avella said, “I remember telling her at the Sectional, ‘You’ll be back, stronger, as a senior,’ because that’s what she does. She comes back stronger after every injury that she’s ever had as long as I’ve known her.”

Betts said, “It was kind of still really motivating. He told me that I did everything I could and really to not focus on what things could’ve been because, obviously, if I was in the whole season it would have probably ended up way different.”

The injuries that Betts experienced made the team stronger, according to Grzeslik. “We all really realized that you can’t take any of the moments we have together for granted, and it just really made us a positive team no matter what was going on,” Grzeslik said.

Avella said, “This experience with Julia has taught me that you’re never out and that despite injury and hardships that occur in a season, if you stay focused, you can accomplish anything that you set your mind to.”

“Just don’t give up, even when it seems you’re not going to be able to help,” Betts said. “You can surprise yourself, and even if you’re not at your fullest potential, you’re still contributing and there’s still always time to make things better.”