Mira The Detective: the case of royal representation 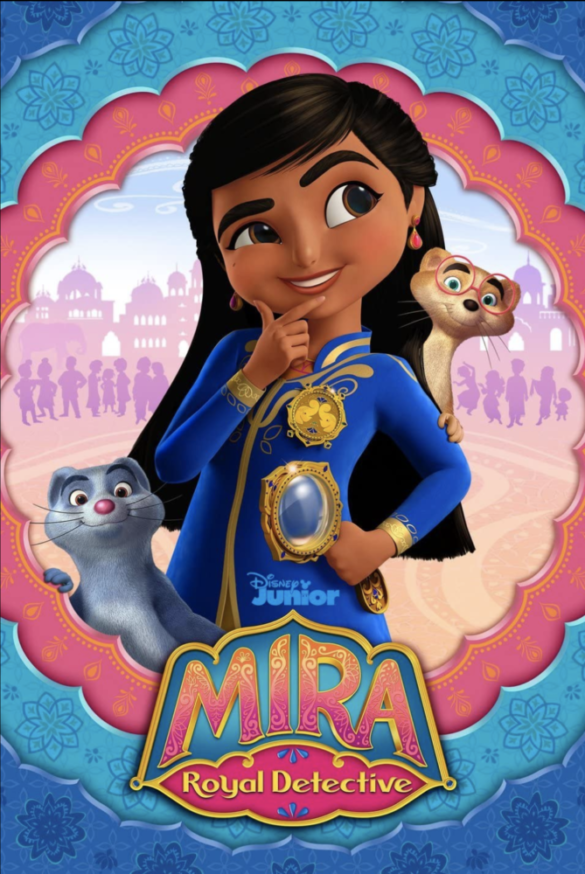 From IMBD under fair use

Last month, I listened to a dynamic pair of Indian grandparents telling me about the chronicles of their grandchildren. Smiling bright, they described the young personalities, vibrant and wild. I was losing myself in the generational gap until one of the children’s infatuations caught my ear: a groundbreaking Indian investigator named Mira.

Set in Jalpur, India, “Mira, Royal Detective” features a young and intelligent Mira as she cracks the toughest of cases and takes deep dives into Indian culture, always sure to stop for a cup of chai along the way. Whether she’s saving her kingdom from the notorious thieves, Poonam and Manish, or kicking it back with her mongoose friends, Mikku and Chikku, Mira owns her culture, showing South Asian children they can do the same.

Voiced by Leela Ladnier, Mira is the first South Asian protagonist of a Disney Jr. series. Ladnier’s energy manifests Mira’s character perfectly, bringing her to life. The series consists of some of the biggest South Asian-American names, with Kal Penn as the voice of Mikku and Deepak Ramapriyan as the head composer.

Generally speaking, it’s easy to develop animosity towards children’s TV shows–the relentless replay of theme songs and predictable plots are a package deal with managing little kids. But Mira? She makes it all worth it, highlighting Indian customs and bringing smiles to the faces of older generations. I’m 15–arguably too old for Disney Jr., but when I tell you I’m obsessed… it fills my heart to its brim knowing that little brown kids finally have accurate representation, a character to look up to and call their own.

Not only do Mira’s investigations give South Asian children a sense of belonging, but they also allow their friends to connect to and learn about South Asian culture. Mira celebrates Raksha Bandhan, a festival that affirms the special bond of protection between sisters and brothers. Originating in Northwest India, siblings tie rakhis, amulets made of thread, around each other’s wrists. Crafting this into an adorable message on the power of sibling-like connections, Mira sings, “Rakhi means love!”

It doesn’t end there. Despite its checkered past, Disney has made strides toward the light. Disney’s “Encanto” represents first-generation immigrants–telling the tales of a magically gifted Colombian family, the movie delves into the beauties of Latin culture while establishing that the lust doesn’t come for free. The company recently announced 22-year-old Hailey Bailey as the lead of the “The Little Mermaid” live action film. The casting of a black actress has black girls elated to see themselves in a princess.The media company has a massive influence on children all around the world, and with its great power comes the great responsibility to include each of them.

From Diwali to mongeese to exorbitantly long weddings, stories like Mira’s are shaping future leaders, encouraging them to celebrate diversity in the most adorable of ways.