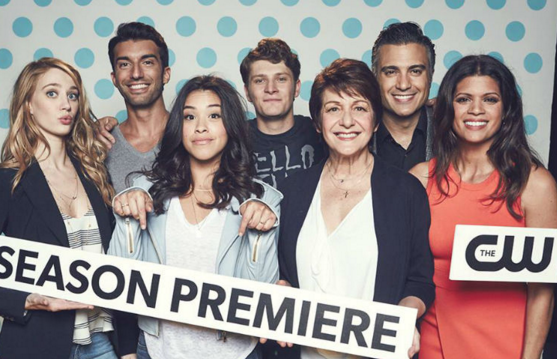 Cheesy drama and dull love triangles are what your typical, cliche rom-com consists of. But a love triangle between a pregnant virgin, her handsome baby daddy, and her daring private detective boyfriend? Much better.

“Jane the Virgin” released the first episode of its third season on Monday, Oct. 7 on the CW. It starts where the drama left off at the end of season 2. The episode answers enough of our questions as viewers to relieve us, but leaves some unanswered to keep the suspense alive.

The many twists and turns in “Jane the Virgin” are what makes it better from other shows in the genre. Jane Villanueva (Gina Rodriguez) is a 23-year-old virgin who has been dating Michael Cordero (Brett Dier) for 2 years. Now this is where it gets interesting; at a doctor’s appointment in season 1, she gets accidentally artificially inseminated with Rafael Solano’s (Justin Baldoni) sperm. To add to the madness, Petra Solano (Yael Grobglas) is Rafael’s crazy wife who goes behind his back and takes his only sperm sample and tried to get inseminated with it to keep Rafael from divorcing her. There are many jaw-dropping and heart-shattering events that follow with Rafael’s family, what Jane does with the baby, Petra’s twin sister, and the love triangle between Jane, Michael, and Rafael.

The new episode had a unique, crazy twist on a cliche scene. Jane’s husband, Michael, was shot and in the hospital as Jane and their families are scared and heartbroken. This has been done before, but the other events occurring at the same time provide originality. There is a twist with Rafael’s ex-wife, Petra, and her twin sister named Anezka that ends with Petra being put in the hospital. This bizarre, yet intriguing story with Petra and Anezka is going on in the same hospital that Michael and Jane are in. Only in “Jane the Virgin” can you get all of this everlasting drama. Each episode and scene is so intense that you will never be bored watching it.

Another strength of the show is how the actors get extremely immersed in their roles. This is not a soap opera with terrible, cringe-worthy acting. In the waiting room when Jane is crying for Michael, she is so invested in the role that the viewers feel real sympathy and have genuine hope that Michael and their love will survive. Jane then goes into the room and talks to him as if he can hear her. She tells what their future will be like with every detail. The passion in her voice and the tears spilling out of her eyes are what makes her performance realistic and touching.

The dialogue between the characters is very effective in the way that it makes viewers feel many different emotions. The dialogue is usually funny but can be sad, depending on the situation. For example, Jane is faced with the difficult and tragic decision of if Michael should have a life-threatening surgery, or if the bullet should be left in his spine which could paralyze him from the waist down. Jane says, “We talked about who would take out the trash and when we would have another baby, not what I should do if there was a bullet near his spine. I don’t know what the right answer is.” This scene made me feel the pain that Jane was feeling, and it brought tears to my eyes.

The new season of “Jane the Virgin” continues to make viewers laugh, cry, and everything in between. It does not just seem like an hour long TV show, it gives you an hour to see into and live Jane’s crazy life.