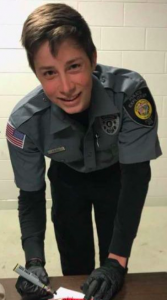 Graham Fath at the Explorer police training program. Fath died in a single-car crash on Wiley Road in Schaumburg on March 11.

Outside Ahlgrim and Sons Funeral Home on March 17, a line of people extended well into the parking lot. As visitors shuffled forward, the line continued to grow. These people came to honor Conant junior Graham Fath, who passed away on March 11 in a single-car crash.

Inside, the funeral home was filled with posters, pictures, achievements, and prized possessions of Graham. With faces of sorrow, attendees comforted one another, exchanging kind words, memories, and embraces. Because Graham was involved in the Explorer police training program, over 200 police officers and Explorer participants showed up in uniform and conducted a procession and flag ceremony.

The Fath family put Graham to rest in his Explore police uniform. Graham’s older brother Colin Fath, ‘17, explained, “That was his dream. He loved the Explorer program and wanted to be a positive force in the world. It’s what he would have wanted.”

On the same night, a group of students also arranged a lighting ceremony at the Fath house, where friends of Graham put homemade lanterns along the driveway and street nearby. After setting up, the group circled around a lantern and sang “Piano Man,” one of Graham’s favorite songs.

According to friends who knew him, Graham was funny and clever, with dry humor. McKenzie Morgan, ‘19, said, “I’m going to miss everything about him. His voice, his smile—his smile lit up the whole room when he walked in.”

Graham was a leader in the recently formed Conant Students Against Gun Violence Committee (CSAGV), through which he helped to organize the walkout held March 14. Stephanie Svarz, a faculty sponsor for CSAGV, said, “He was in charge of trying to figure out the logistics of the walkout. He was also very active in the message, as in getting a hold of the politicians.”

Linnea Pietsch, ‘19, a member of the CSAGV committee, explained Graham’s passion against gun violence. She said, “He was a very passionate person. If he believed in something, he would fight you about it.”

Graham had also been involved in Conant Band and Jazz Band, where he played the trumpet. Band Director Leann Roder-Manson explained how last year, Fath wasn’t able to be in Jazz Band due to his father having a massive heart attack. She recalled, “He gave up what he was doing so he could be with his mom. He came to me, a few weeks ago, to give me a hug and say, ‘It’s been a year since my dad’s heart attack, and I’d like to thank you for being supportive and understanding.’”

Roder-Manson also said Graham’s visit was surprising, not typical of a high schooler. She said, “In my experience, once you get past an event, you kind of move on and forget.”

To further help his mother during the difficult time, Graham continued his family tradition of making soda bread every year. “Graham felt that he had to make the soda bread because his mom couldn’t. He also brought in loads of soda bread for everybody to share in band,” Roder-Manson said.

Roder-Manson explained her cherished memory with Graham: “He would always peek his head around the door to my office, and he would say ‘Hi Mrs. Roder-Manson.’ He just wanted to check in and see how I was doing. That was just who Graham was.”

Ted Gross,’19, Graham’s bandmate and friend, said, “All of my best memories of him were in band, next to him. [In] all of the sleepovers we would have, he has helped me with my problems.”

Another friend, Sachi Goel, ‘19, agreed that Graham was a kindhearted and selfless person. Goel said, “Regardless of what was going on with him, he would push off whatever he had if any of his friends had an issue.”

Graham’s kindness also impacted Svarz, a first-year English teacher. “He was compassionate at all times and had that pervasive quality that doesn’t always exist in someone in high school,” Svarz said. “As a high schooler, you’re supposed to be thinking about yourself and figuring out you who are. But Graham was always conscious and considerate in helping other people figure out who they were along the way.”

Svarz said that Graham always had a kind word or smile to share. “He would ask you how were doing and ask follow up questions. Instead of accepting, ‘Oh, I’m good,’ he would ask, ‘Why are you good?’”

Memories with His Brother

Graham had two brothers: Sean Fath and Colin Fath. Colin said that he and Graham had a close relationship because they were just two years apart. Although sometimes the age difference caused conflicts, Colin said, “Anyone with siblings knows that siblings fight, but anyone with siblings two years older [or] younger knows just how much. My mom always loved to tell us about all the times when we were little, and she would give me a timeout for picking on Graham, but he would come sit by me in the corner, so I wouldn’t be lonely.”

As both Colin and Graham got older, the bickering between them continued. “I’m sad to say the teasing wasn’t lost with our baby teeth. We pushed each other’s buttons constantly, but only a handful of disagreements ever went without a hug and apology afterwards,” Colin said.

Colin shared some of his cherished memories. “I miss Sunday morning cartoons with Graham. I miss building Legos in the basement and playing with him for hours,” he said. “We used to stay up late in his room and throw stuffed animals at each other like a snowball fight.”

Colin explained how one of them would hit the door, which caused his mother to tell them to go to sleep. “The game always ended when one of us got hit in the face and didn’t want to play anymore, but it was always fun while it lasted,” he said. “I miss that crooked little grin when he dodged one or got me good.”

Colin said he misses “every last thing about my little brother….He was an insightful, intelligent, caring, loving, kind, considerate, strong-willed, fair, visioned, and creative gift of a little brother. He inspired me to be a better person and still does each day.”

In 2013, Colin, Graham, and childhood friends Tyler Fredrickson and Matt Grammas helped rescue a father and son in Vermilion River. Colin explained that after the father and son were safely on their raft, they all got pulled by the undertow of the rescued father and son’s raft.

“We waited for another 20 or 30 minutes yelling to our moms on the riverbank and trying everything we could think of to break free before two kayakers showed up,” Colin recalled. “He [one of the kayakers] got out his throw rope, and we pulled with all our might till we got free.”

Colin explained the impact of the experience on Graham: “I think the whole experience was pretty stressful, and Graham felt pretty helpless (as did we all). The desire to help more next time really struck home with all of us, and Graham funneled that into his classes in the Explorer program.”

Friends and family of Graham’s plan to keep his memory living on in several ways. Morgan offered, “Maybe for graduation, we could leave a chair for him and have his diploma.”

As for Conant Band, some members and friends of Graham have ideas involving his instrument. Gross said, “Since he was a huge part of band, we’re going to make our trumpet-section t-shirts in honor of him.”

Andy Farnsworth, ‘19, said, “I want everyone to sign his trumpet case and give it to his family.”

To express Graham’s values in life and honor his memory, Colin explained an activity that the Fath family would appreciate: “We ask that people plant a tree in his name. He loved nature and trees especially. He may not have been especially religious or faithful, but the forest brought him peace. He always wanted to help the world be a better place, and we can’t think of a better way to uphold that legacy.”

Note: Click on an image to view it in full size.