Clearing up the smoke: A look into vaping at Conant 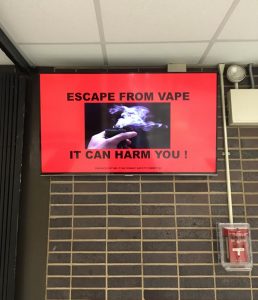 A display on a television in the hallways urges students not to vape. | Photo by Sarah Yamaguchi

On April 3, Conant students discovered what may have seemed like a belated April Fool’s joke: the doors to the boys’ bathroom next to the cafeteria had been removed. However, the real reason behind this change is no laughing matter–it is an effort to stop students from vaping at school.

Vaping, which is inhaling and exhaling vapor created by an electric device, has become increasingly popular among teenagers across the country, including at Conant. Vape juice, which can contain various ingredients and comes in different flavors, is put into the device and heated so it can be inhaled.

Lead Assistant Principal Thomas Mocon sent out a memo to Conant staff late January after noticing this trend. The email briefly explained how to identify vapes or e-cigarettes and what to do if teachers find a student using a vape in school. Teachers also attended a brief professional development meeting where they learned more about the topic.

Discipline and changes at Conant

Mocon said that the memo was prompted by increases in vaping-related issues in the discipline office. By Spring Break, he said the amount of vaping-related infractions had tripled since the 2016-2017 school year. He believes students may think they can get away with vaping “because it’s easy to conceal and doesn’t have a smell that is immediately noticeable.”

He also said that while “the devices themselves are very unfamiliar to staff,” since sending out the memo, several staff members have reported students they suspected of vaping.

The bathroom doors were removed because that specific bathroom was a “hotspot for vaping infractions,” Mocon explained in an email to the Crier.

He said that even with extra monitoring of the bathrooms, infractions continued. “We felt the doors provided a false sense of security and have decided to remove the doors as a safety measure to prevent students from continuing to engage in this unhealthy, dangerous and illegal behavior,” Mocon explained.

Mocon also mentioned that Conant’s bathrooms will be renovated next year, and “doors won’t be installed everywhere, anyways. Regardless, student privacy in using the restrooms will be ensured.”

Bathrooms are the most common place for students to vape in school, but vaping anywhere on Conant grounds violates school policy because vapes can contain nicotine and marijuana. The student handbook indicates that vapes containing “just flavoring” are also banned at Conant. When disciplining students, Conant considers vaping “the same as using any tobacco product or any sort of drug in school,” according to Mocon.

Mocon explained that a student found vaping can face consequences including suspension, a ticket from the Hoffman Estates Police, mandatory participation in healthy living seminars held by counselors, parent conferences, and conferences with activity sponsors or coaches.

“It’s really about interventions to get the students to understand this is not healthy behavior, and it’s not acceptable at Conant,” Mocon said.

Mocon encouraged students to report if they witnessed other students vaping in school and explained that many tips currently came from students.

However, not all students know how to tip off administration. Ellie Galovich, ‘20, said, “I wouldn’t really know what to do if I saw someone vape. Maybe I would tell a teacher, but I don’t know.”

Mocon also recognized that vaping is increasing at many other schools, as well. “This isn’t just a Conant High School thing. It’s [happening] all over the country, but we have just seen a real spike in it recently,” he explained.

For instance, at New Trier High School, the administration and school board have been considering adding vape detectors in school bathrooms and increasing the consequences for students who are caught. The detectors notify administrators of changes in air quality via phone alert.

A 2017 survey of over 43,000 students by Monitoring the Future revealed that 27.8% of high school seniors reported that they had vaped in the past year, and 16.6% had vaped in the past month. These levels are higher than the percentage of students engaging in other risky activities like binge-drinking, smoking cigarettes, or using illegal drugs.

The fact that vaping is a relatively new phenomenon means that nobody knows its full, long-term effects. One reason for this craze may lie in misinformation among teens.

People often believe vapes are a healthy option compared to smoking. Traditional cigarettes have many carcinogenic chemicals in them, like arsenic and lead. While vapes and e-cigarettes do not contain these harmful chemicals, they contain other chemicals linked to causing cancer and lung damage, and the health risks of many of the chemicals in vapes remain unknown.

Additionally, vapes often contain nicotine, the addictive ingredient in cigarettes. Nicotine is highly addictive, with withdrawal symptoms including cravings, anxiety, and moodiness. E-cigarettes are associated with helping smokers quit, but research suggests that vaping may cause teens to start smoking. A study by the BMJ medical journal found that students who used e-cigs were four times more likely to have smoked a year later.

Sarah Compton, ‘18, said, “I think casually vaping is probably okay, but those with serious nicotine addictions may suffer health problems in the near future.”

Health Department Chair Lorel Cunningham said that vaping is covered in health class, which is a graduation requirement for District 211 students.

Cunningham’s classes cover the topic with a mock-debate, where students try to“prove” if tobacco or e-cigarettes are healthier. Ultimately, she said that as students “poke holes in each other’s arguments,” they learn that neither are healthy choices.

The class also discusses marketing related to vapes. “Companies are marketing them to kids,” Cunningham explained. “[E-cigarette companies] say how it doesn’t have tar, it’s not as bad for you, and it comes in yummy flavors. So it’s very much marketed to a younger crowd.”

Ultimately, Cunningham emphasized that students need to think for themselves. She said, “You are becoming young adults and are going to have to make these decisions. There are going to be people in here who smoke e-cigarettes and use vapes, and we don’t want to call them names or anything like that, but we want to educate them on making healthy decisions for themselves.”

According to the 2016 Illinois Youth Survey, approximately 10% of Conant students self-reported that they vaped.

For students over 18, vaping is legal, so long as it isn’t done on school grounds.

Compton explained, “I started [vaping] because it was ‘cool,’ but now I do it as a social activity. And at home, it can be relaxing.”

Compton said she does not vape at school, adding, “I don’t think it’s cool or funny or whatever. I’ve seen guys vape in the cafeteria before and I know a lot of people do it in the bathroom. I don’t think it’s worth the risk of getting caught.”

Vaping may be on the rise at Conant; however, there are still plenty of students who don’t encounter vaping on a regular basis. “Vaping hasn’t really affected me. I’m okay with it,” Galovich said.

Aleeza Kane contributed to this story.