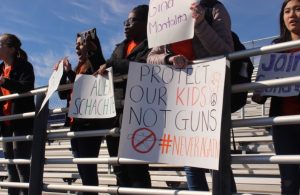 Members of Conant Students Against Gun Violence holding up signs with the names of victims of the Marjory Stoneman Douglas shooting.

The bell rang, bringing second period to a close. Instead of walking to third period, nearly 500 Conant students exited the building for 17 minutes on March 14. People driving past the stadium on Plum Grove Road saw a sea of orange shirts and posters. If they had their windows rolled down, they may have heard chants and speeches from student leaders.

Just one month before the walkout at Conant, 17 students were killed in a mass shooting at Marjory Stoneman Douglas High School in Parkland on Feb. 14. In response to these events, Conant students have grouped together to express their beliefs against gun violence.

With Parkland High School students who survived the shooting starting this widely recognized national movement, teenagers are taking a political stand and making their voices heard.

CSAGV Student Leader Anisha Narain, ‘18, explained that the movement is about spreading awareness. “We need to approach this issue from a couple of different angles and have a ‘360 degree’ approach of how guns should not be in the hands of people who shouldn’t have them, but we also need to promote a safe school community without ostracizing anyone and promote positive mental health,” Narain said.

CSAGV’s mission is to bring justice to the victims of school shootings and other massacres by fighting for congressional action in response to the public health crisis of gun violence.

Narain said that by selling orange shirts and orange ribbons, CSAGV made a profit of just over 600 dollars for the Sandy Hook Promise. She said, “We chose the Sandy Hook Promise charity because they align with our belief of the two-tiered approach of combating mental health issues and forcing the idea that gun control is necessary for a safe society.”

On April 20, there is another nationwide walkout. But on that same day, Conant’s annual I-Fair (International Fair) will be taking place. Narain said that CSAGV is not planning on walking out because the “goal is not to distract the school day further.”

Instead, Narain said that in order to keep momentum for the movement, CSAGV is hoping to continue to sell shirts and stickers to raise more money and to organize a voter registration drive. “How many walkouts really induce change if we don’t couple them with movement towards getting more people involved in a permanent way?” Narain stressed.

Narain explained that the shirts and ribbons were orange because it is the representative color of the movement. As stated in the Wear Orange website, “Orange is what hunters wear in the woods to protect themselves and others from harm. Orange is a bright, bold color that demands to be seen. Orange expresses our collective hope as a nation — a hope for a future free from gun violence.”

Teens taking a political stand
Students at Conant, along with students from across the nation, are voicing their political opinions. “Adults can be overly-critical of ‘kids these days,’” Service Club Sponsor Asra Syed said. “To see teenagers have some impact that adults haven’t been able to have with this issue is heartwarming and makes me hopeful that your generation isn’t being passive.” 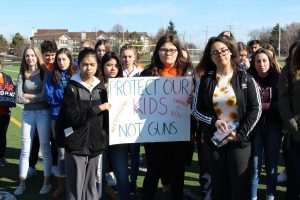 Conant students holding signs at the walkout to spread their message.

Syed, who was asked to be a teacher chaperone for CSAGV, noted that it is a student-led movement that is not sponsored by Conant. “I was honored that the students trusted me and know that I would do what I would without getting too involved and still have it be a student movement,” she said. “It is impressive how our students are coming together to organize this in an appropriate way, and it’s reassuring to know that our school has taught them the skills to advocate for what they believe in.”

Other adults believe that students can advocate for their opinions in different ways. “There are a lot of soft things we could do before a walkout to make Conant a safer place,” social studies teacher Frank Kernats said. “Instead of walking out, why don’t you walk up to the lunch table of a kid who sits there alone every day and say ‘hi’ to them?”

CSAGV Student Leader Bridget Tobin, ‘20, said it is important to get involved in politics as a teen, even if you cannot vote yet. “You must know where you stand at a young age so you can decide what side of history you want to be on,” Tobin said. “This is what will be in our children’s textbooks and something our grandchildren will ask us about one day.”

Narain explained that this generation has been using social media positively to spread awareness about everything. She said, “This specific movement is a result of all the social justice movements that are culminating into one, unified cause and it’s about the voices of every student.” There are many hashtags on social media associated with the movement, such as #NeverAgain, #NotOneMore, #Enough, and #MarchForOurLives.

Students across the nation are walking out of their schools. In District 211, Schaumburg High School (SHS) had a walkout on February 21 that was covered by media. SHS student Jennifer Moore, ‘18, said, “[The walkout] made me feel like the school was united because, on a normal day, everyone has their friend group, but everyone was like a whole friend group fighting for the same cause.”

The official March for Our Lives website says that it “is led by students across the country who will no longer risk their lives waiting for someone else to take action to stop the epidemic of mass school shootings that has become all too familiar.” For students interested in this nationwide march, it is this Saturday, March 24. In Chicago, the march will be taking place at Union Park at 11 a.m. If students are looking for a more local event, there is one at Schaumburg Town Square at 9 a.m.