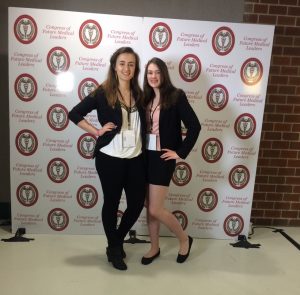 Victoria Shannon (right) and her friend, Maria, from Oklahoma at the Congress.

Victoria Shannon, ‘18, attended the Congress of Future Medical Leaders this past summer in Lowell, MA. Shannon received an Award of Excellence at the Congress.

The Congress was a three-day event, where students from across the nation listened to speeches given by health professionals, including Nobel Prize winners. “A lot of the stories were really touching: people with near death experiences and hefty recoveries,” Shannon explained.

One story that inspired Shannon was about Sean Stephenson, a man born with brittle bone disease. His parents were informed that he would not have a long life. But to this day, Stephenson is a survivor at age 38 and has obtained a doctorate degree from Depaul University.

“He admitted he always thought about giving up on life due to his disorder,” Shannon stated.

But Stephenson repetitively reminded the delegates in the Congress that “you have to embrace everything as a gift.

“The message I took from Stephenson’s speech was to accept my life as it is so I can accomplish anything.”

The speech further inspired Shannon as she has wanted to become a cardiologist since she was seven years old.

The Congress also exposed the delegates to biotechnology and procedures. “I learned about surgical techniques and prosthetics that I never knew existed,” Shannon said.

The National Academy of Future Physicians invites students to the Congress of Future Medical Leaders, which is dedicated to students interested in pursuing a career in medicine.

Shannon received an invitation to the Congress through mail. This invitation is based off of the student’s GPA and/or teacher recommendation.

Although Shannon had to pay to attend the Congress, she feels that it was an experience that could not be replaced.