Educators, parents, and students discuss the responsibility of Digital Democracy 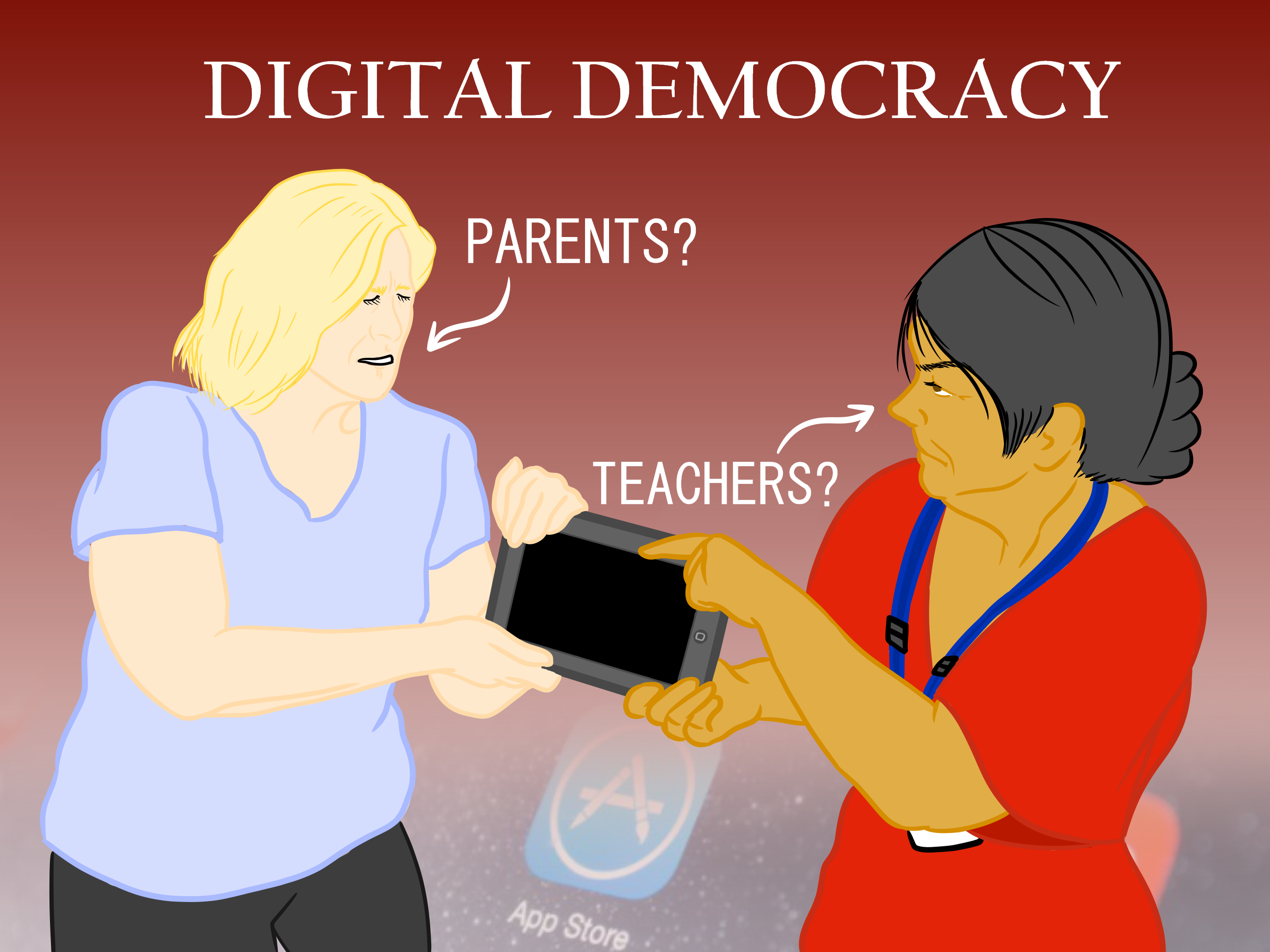 Bored of her teacher, Lindsey pulled out her iPad and tweeted about how annoyed she was with him. She didn’t think much about her post. Four months later, Lindsey received a letter from the university she applied to. Excited, she ripped it open, hoping that the last four years had paid off. To her dismay, she discovered she had been rejected. Lindsey thought about what could’ve caused this.

A recently released Kaplan study shows at least 40% of college admissions officers check applicants’ social media. This makes it important for all students to remain conscious of what they post on social media.

University of Illinois admissions officer Sammy Rose-Sinclair said that U of I does not check students’ social media.  However, she explained, “We want students in our school who are respectful and conduct themselves well, and that means on paper and online.”

“Think before you post” is one of the six guiding principles of Digital Democracy, a District 211-wide program focused on being responsible with technology. 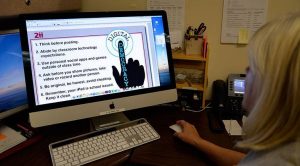 Considering how ubiquitous the use of technology has become in high school classrooms, many people have questions about educating students on the norms of appropriate, responsible technology use, or digital citizenship.

School administrators say that with more technology in classrooms, it’s time for the schools to become more involved in making sure students are safe on their devices; however, others believe that safety always starts at home, and that parents should be more involved.

The responsibility of teaching digital democracy

It’s important to be a digital citizen, but who is responsible for teaching that to high school students?

CHS Principal Julie Nowak stated that both parents and schools share the responsibility of making students ideal digital citizens. “It’s a partnership. It is a parent’s responsibility to be aware of the technology their child is using, to understand the scope of it, and the set limits as needed,” she explained. “I really think it’s so engrained in our society now, that the schools need to take a little bit of responsibility as well.”

However, some students think that the balance between parents and schools should be different. For example, a few stated that the parents are better teachers of responsibility than schools. “I think it’s the responsibility of the parents because a school is for education,” said Divya Gudur, ‘17. “The era of technology has more to do with discipline than education, so parents should be responsible for discipline.”

Last year was the first year that all freshman iPads were locked. Freshmen were unable to access apps such as iMessage, AirDrop, FaceTime, and the App Store. Kim said the district took surveys of teachers, parents, and students before finally reaching a consensus.

The iPads remained restricted the whole year, and students would be required to complete a 30-hour online Digital Democracy course through schoology to relieve their restrictions. The courses were an in-house creation. The district created them with the help of different students’ inputs, technology coordinators, and some information from YouTube (taken with permission) and other online resources.

Nowak said that the courses are structured almost like college online classes. “It’s kind of like taking an online course, which is a great opportunity for students because many colleges offer students online courses,” she explained. “That alone is a great digital learning opportunity.”

She also said that the courses have worked and shown improvement in students. “I can see that it is getting better,” she was happy to say. “Students aren’t very distracted, and kids care when their friends are victims of bullying because they want to be safe on the internet.”

Leah Pope, ‘18, feels differently, saying schools should not be responsible because “they assume all students need to be taught to not use their iPads for distractions.”

It’s unnecessary when the parents can talk to their kids about it if they need to,” she continued. “Parents see their grades, and they can tell them everything this [Digital Democracy] course would if there was a problem with their grades related to the iPads.”

Pope and Gudur believe that each student’s needs are different, which is why parents can understand them better.

Krisha Jivani, ‘20, has a different point of view. “I think it is the responsibility of the school because not all households have access to technology.”

Technology Coordinator Paul Kim stated that many parents want to help their children be good digital citizens, but it might be difficult for parents to understand the technology themselves. “We hope that parents can take charge at home,” he said. “Often, parents do ask for assistance because they are losing control at home; we do help parents as well as students.”

Kim explained that he hosts parent technology sessions on a quarterly basis to inform parents about school issued iPads. He has not yet determined meeting dates for this year, but they will be posted on the school website.

Digital Democracy sponsors John C. Brown and Neal Hannant both said that the cooperation of parents and schools is very important. “We see these students almost every day,” Brown said. “And the parents do too, so it’s both our jobs.”

Morgan Long, ‘19, feels that a compromise between both entities is the best way to go. “I think parents should definitely go over it with their children,” she said. “But if a school wants to use electronics in their curriculum, then they need to set rules, too.”

I love how the school keeps us, as parents, informed. That way, I know what to talk about with my child at home,” she continued.

Long said that she likes how Conant teaches digital responsibility through courses because it helps her focus a lot better in class. “Personally, I get sidetracked a lot whenever I do my homework or even in class sometimes.”

Long thought the restrictions enabled her to learn more during class; however, there were students that didn’t appreciate them. The attitudes towards the courses and restrictions were clearly split.

The restrictions and attitudes towards them

Kim said restricting all incoming students’ iPads wasn’t an easy decision to make, but it was worth it. “We wanted to give teachers and students flexibility,” Kim said “However, we also wanted to educate the kids that this is a learning device, so we decided to restrict the freshman and give them all the apps they need.”

“We had a lot of support from parents, students, and teachers alike,” Nowak said.

Additionally, despite many completed courses, most sophomore iPads are still restricted. This caused many sophomores to be rather upset. “I felt disappointed that our iPads would still be restricted, and we would have to do more of those courses to get them unlocked again,” said Long.

“There were some glitches here and there, and there were some technical difficulties that we are still trying to fix,” Kim explained. “We’re hoping that it’ll be fixed and students have an opportunity to finish their courses.”

The school also recognized that many students needed help with their courses. To combat this issue, the school replaced the CAP program with PRIDE, a program designed to help freshmen with their digital democracy courses and learn other aspects of the school.

While many students, parents, and teachers are grateful for the restrictions and courses, others aren’t.

“I don’t think there is a need for restrictions because, as a freshman, I knew iPads come with distractions,” said Pope. “I know that will harm my education, so I don’t let myself get distracted.”

Kimi Nijjar, ‘19, added, “I don’t think that the courses helped me stay focused. The courses were confusing, and there wasn’t anyone to help.”

Some freshman and sophomores feel that they are being “punished,” especially because juniors and seniors didn’t have any restrictions; however, Kim explained that the restrictions weren’t meant to be taken this way.

“As we modify this program, we’re going to find that it is the best program for our kids and our students,” he continued. “We’ve decided, as a district, that restricting them a little bit, not as a punishment, but as a learning tool, will allow them to become more responsible on technology as they mature.”

Gudur feels that there was another solution. “I think a solution to the problem is locking students into classes [through Casper Focus],” she said, citing examples such as, “locking people into Notability so that they are forced to pay attention.”

However, Kim said that Casper Focus had been tried before. “It had too many ways to get around it. The restrictions and courses are more educational than just locking students in,” he said.

Kim said the change is because technology is an important part of D211 high schools, and he wants to keep moving forwards.

“I think the iPads are a great learning tool. I don’t think we ever want to go back in the other direction,” he stated. “We want to continue to explore the best options, the best tools. Our district is very good about staying in front of technology.”