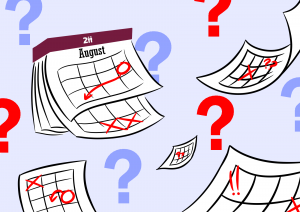 Students began school about two weeks earlier, causing many events to be affected.

The District 211 school board, students, staff, and community participated in a vote at the end of 2014 to create a schedule that mirrors a collegiate calendar. Since then, the board has initiated the shift beginning this school year.

The most obvious motivation for the calendar change is final exams being moved prior to winter break. The last day of first semester finals is now Dec. 23. CHS Principal Julie Nowak said a major parental concern was finals being so close to the holidays. However, the district sent out many emails, letters, and voice mails to make parents aware of the shift. “It would be our hope that we provided enough advance notice that families could plan their vacations around that,” Nowak said.

Students will also get a “real” winter break for the first time, where they won’t be studying for finals. “We had parents talking about their kids spending a lot of time preparing for tests. This really gives families, students, and teachers a restful break and a chance to get ready for the new year,” Activities Director Robert Small said.

“Personally, I liked studying for finals over winter break, but I’m glad that school will end earlier; I can manage studying before break,” Anisha Narain,‘18, said.

The last final exam of the 2016-17 school year is scheduled for May 23. Although starting school earlier may have been disappointing for some students, Himal Patel,‘18, is excited for school letting out earlier from now on. “Next year, when I’m a senior, I’ll get to graduate before Memorial Day, which is a plus,” Patel said.

Another effect of the calendar change is more time to prepare for standardized tests. “A big part of this shift had to do with best use of instructional time,” Nowak said.

AP testing, for example, takes place in the end of May, and since the school year started earlier, students will have extra educational time before testing. AP US History teacher Amy Spizzirri said, “I think the shift is valuable because it gives us two more weeks of teaching time before the test. I feel like I’m always running out of time, and now I feel like I will have…ample time to review.”

There is also less time after AP testing. In the past, AP students had an entire month of school following the AP test, which some, but not all, teachers have a difficult time filling with work. “There weren’t any curriculum changes, but I moved everything forward. It’s a better use of instructional time that gives students more time to prepare for exams and less to worry about afterwards,” AP Psychology teacher Jennifer Stearns said.

“[School ending closer to the end of AP testing] is great because all we do is waste time in class on useless assignments after AP tests,” said Narain.

The effects of the calendar change also apply to sports. In previous years, fall athletes would start training three weeks prior to school starting. This year, they only needed to start four days early, according to Small. “Tryouts started in the beginning of August, so before I knew it, it was time to get back to school. Since the school year started earlier, unfortunately we had to go to some tournaments without playing much beforehand,” Nikitha Lakshminarayanan, ‘18, said.

She also added how the new athletic schedule has affected her academics. “Last year, we had the first couple of weeks to settle in and get a good flow with our school work. But now that we started earlier, we didn’t get the opportunity to get in the hang of things,” she said.

The calendar change also allows freshmen to join a sport more easily because they won’t have missed as much pre-season training. “You still have time to join a sport,” encouraged Small.

Small also confirmed that all activities and competitions will conclude with the conclusion of the school year, excluding state competitions, which graduated seniors will be allowed to participate in.

Summer jobs could also be easier for high schoolers to get with the collegiate schedule. “Now all the college kids won’t take the jobs before the high schoolers get out of school,” Small said.