iPad Restrictions: Cure of distracted students or cripple to education? 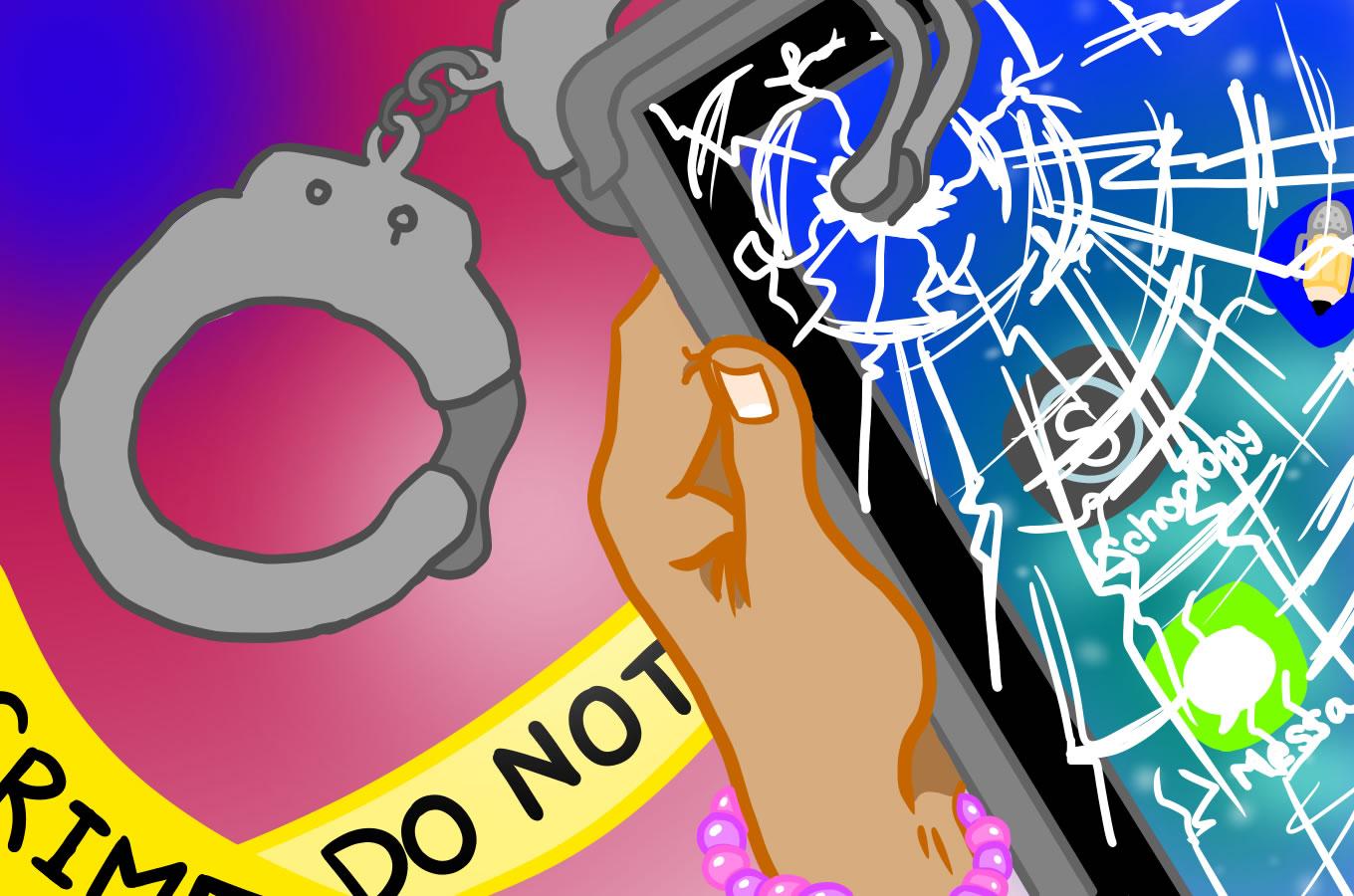 Imagine a biology classroom full of freshman boys and girls. As a freshmen biology teacher attempts to teach mitosis for the fourth time, he sees the eyes of his students glaze over in a hallucinogenic trance from the brightness on their iPads. So he turns to his own screen, frustrated, and puts on Casper Focus to lock his students into Schoology and help them concentrate on the lesson. However, he is greeted with failed results as many of the screens do not display what he had wished they would. This happens routinely. The teacher sends out a silent prayer that next year it will be different.

This scenario has appeared in nearly every classroom at Conant, whether it be science, English or math.

Given these incidents, the district determined it would be worthwhile to address the possibility of restricting iPad access at its schools.  At their weekly meetings, principals from all five schools discussed their options and determined that restricting freshmen access while requiring online technology courses could be a meaningful solution.

In the 2015-16 school year, freshman were given iPads that were limited to only educational apps in order to help them focus. The change was brought on by all D211 schools to save the students. Although iPad restrictions would put an end to the epidemic in theory, were they really the solution Conant needed?

The Freshman iPad Restrictions: What are they and how do they work?

All freshmen iPads have a set of pre-downloaded apps that they are allowed to use and have no access to the App Store. If teachers wish to download an app for their class, they must fill out an app request ​​form. Additionally, iMessage, FaceTime and Game Center have all been blocked, along with a series of websites that include social media outlets and entertainment venues such as Instagram, Snapchat, and Netflix. There is no access to explicit content, and freshmen are not allowed to delete their web history. These restrictions extend across all D211 schools.

Freshmen are required to take a 15-hour Digital Democracy​ course before their iPads are unlocked from the restrictions in their sophomore year. Digital Democracy ​promotes the idea of ideal digital citizenship and teaches how to use social media properly, avoid distractions and effectively use the iPads as a learning tool. It is an online course filled with videos that teach the freshmen the important skills they must know before their iPads are unlocked.

With all these restrictions in place, the question arises of whether iPad limitations are a vaccine for the school epidemic or an educational cripple?

What the people think: Principal

Crier:​ The sophomore, junior and senior iPads are unlocked while the freshmen iPads have many limitations; why is that?

Nowak:​ In terms of these older students, rather than taking away something, it’s better to leave it up to them. For freshmen, a lot of the students would rather have open access, but they will get that soon enough. It’s like having a driver’s permit before getting your license.

Crier:​ So how has the feedback been from the overall Conant community?

Nowak:​ The reactions have been positive across the board. The parents have been very understanding. Teachers feel very good about this, and they can request additional apps for their classes.

Crier:​ Since you mentioned requesting apps, can you tell more about the process?

Nowak:​ For the freshmen, it was made so that they have iPads with more learning tools rather than distractions. Teachers will have to fill out a form. The apps should be available to them within a couple days after that.

Crier:​ Why not just Casper Focus kids while in class instead?

Nowak:​ Casper Focus didn’t work out as well last year, but it has improved, so we have asked teachers to give it another shot with the older students. Using Casper Focus allows teachers to have control for only 50 minutes, but our goal is that we teach how to use these instruments throughout the whole day.

Crier:​ Can you give an overview of how the iPad restriction decision came to be? Any teacher/student complaints?

Nowak:​ We did have a lot of parents who were frustrated and concerned because they didn’t know what their child was doing on the iPad. It became a social problem for the family, but many parents also understood and appreciated the use of the iPad. We offered evenings where parents can come and learn more about the iPads. Teachers feel like this [the iPads] is a really big responsibility for them. It was a collaborative piece. We had meetings with parents and the administration in our advisory group.

What the people think: Teachers

Crier: How do you feel about the iPad restrictions?

Bob Borczak (science): I agree with the restrictions. They keep [the students] more focused.

Eric Hauser (science): There are less temptations in my freshman biology classes and I support the decision. The restrictions help our students pay attention.

Crier: Last year, did Casper Focus work for you?

Borczak: Kids were finding roundabout ways to get around it, however, this year’s freshmen can fully focus themselves in their biology classes.

The Crier also got a few words from Andrea Willis, a freshman math teacher.

Crier: Have you had any trouble requesting apps for your classes?

Willis: Requesting apps has been an efficient process. When I requested the app Robologic for my programming course, there were a few issues and the administration got it done right away. They did a great job working with us.

Crier: And how do you feel about the overall atmosphere of your classes?

Willis: The freshmen seem to be very academically focused with the iPad restrictions in place. The only complaint I have was that I wished the kids would be taught how to use the technology beforehand, although I agree that they learn very quickly.

Overall, all three teachers gave the iPad restrictions a thumbs up.

What the people think: Students

Freshmen are the primary users of the new iPads and provided some interesting pros and cons about iPad restrictions.

Unlike the teachers, the freshmen weren’t thrilled about these new limitations. Consider, for example, Conant freshman, Jeffery Pagels.

Crier: How do you feel about the iPad restrictions? Especially when compared to the sophomores, juniors, and seniors?

Pagels: I feel frustrated by the harshness of the restrictions. What is extremely frustrating is when you see a sophomore watching a sports game right in front of you while the teacher is instructing, and yet I can’t even check the temperature or message one of my classmates about the homework for next period.

Another freshman, Isabella Greismaier, also said that the restrictions have become more of a nuisance than the district may have intended.

Greismaier: I have noticed I don’t have many of the apps I need for school and have repeatedly needed to visit the tech room. It becomes very inconvenient at times.

Many freshmen are quite upset about the extent of the restrictions and the fact that they cannot update their apps or download necessary apps. Pagels and Greismaier both said that if the restriction was a little bit more relaxed, it would be more user-friendly for the freshmen.

However, the limitations achieve their intended purpose: focusing students. Because of the lack of temptation to do otherwise, freshmen agree that restrictions, although tedious, allow them to focus on their academics.

Greismaier: The iPad restrictions do help to keep you focused solely on your school work and prevent most distractions.

Patel: Educationally, putting restrictions on the iPad has made it easier for me to get my work done faster due to the lack of distractions such as games and messaging. I also thought that the apps being predetermined helped me stay organized.

Overall, all three freshmen agreed that iPad restrictions have helped them academically but that the limitations could be reduced.

This year, teachers can looks around their classrooms and see the eyes of their students looking back at them instead of down at their iPad screens. Although some students might seem unhappy with their lack of apps, they might feel better about their grades at the end of the quarter, as the restrictions have helped them focus, learn, and achieve.

Editor’s note: A previous version of this article stated that Conant Principal Julie Nowak led the push for iPad restrictions district-wide. This did not happen. The possibility of restricting iPads came from the district level and was discussed among each of the district’s five principals at their weekly meetings.