PARCC debuts at Conant and schools across Illinois

On Tuesday, March 6, and then again a few weeks later, Conant freshmen and other select students took a new standardized test called PARCC, or Partnership for Assessment of Readiness for College and Careers. This standardized test, which is being administered for the first time in schools throughout Illinois, was taken by all students in Algebra 1 and Language Arts 1 (Freshmen in E101, E102, and E108 classes) while the Juniors took the ACT.

Conant Student Services Director, Bridget Cain, said, “The PARCC testing is expected to replace the PSAE testing at the high school level and the ISAT at the elementary level.”

So what makes the PARCC assessment different from other standardized tests? Cain explained, “It is different from the PSAE in that there are versions for each course. This year we are implementing Algebra 1 and English Language Arts 1 tests.”

The PARCC testing has big implications for students and schools. Principal Julie Nowak explained, “The PARCC is designed as a measure to assess whether students are on track to be successful in college and their careers. It is also designed to help teachers and school administration better understand the learning needs of their student population. The results for this year’s administration will provide a baseline for how students perform on the PARCC.”

Cain said, “The PARCC is aligned with and will measure progress against the common core standards.” The Common Core State Standards are learning goals to help prepare students for college, career, and life:

The Technology Behind It:

One of the biggest changes in the administration of the testing is that it was done electronically, on district-issued iPads. Conant’s Technology Coordinator Paul Kim explained that students had to make sure the iPad is in good working condition, the screen is on full brightness, the device is fully charged, and that they bring earphones for the audio component.

Taking the test on the iPads is certainly much different than plain old paper and pencil, but Kim said, “There are tools embedded in the test that will be helpful for many of the students as well.”

For those concerned about potential cheating on iPads, Kim said, “Once the test begins, students will be locked into the TestNav app and will not be able to navigate out of the test until the test session is complete.  Other iPad functions will be disabled as well, so the ability to take screenshots, messaging, or use of airdrop will not be possible during the test.”

One of the greatest benefits is the efficiency of taking exams on the iPads. Kim explained, “iPads have become one of the most widely used devices in the education setting, and testing organizations are starting to embrace the technology and making it a viable tool to test with.  The results from the tests that are taken with computers are often available immediately, and the data collection from the results are more timely.”

Racheal Moore and Emma Lewis both agree that the taking the test on the iPad versus paper would affect their scores or abilities considerably. Although with a few technological difficulties, most students found that the PARCC test was doable.  Wooley said, “There wasn’t anything special about it besides that it was on iPads,” pointing out the glaring question: looking past the different format, what does make the PARCC test any different from other standardized tests? 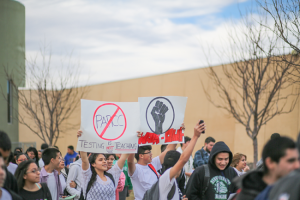 PARCC is a relatively new test and with it comes much controversy. In “People Are Pissed At Pearson,” from the Huffington Post, Alan Singer goes through many states and organizations that are upset with Pearson, the company that created the PARCC test. Many of these states and organizations are upset with Pearson for a variety of reasons, ranging from security measures and privacy policies to not knowing how the test results will be used and whether or not the test actually is a proper measure of the students’ capabilities. 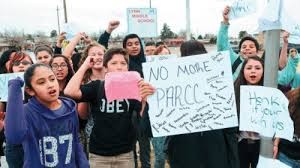 Much  attention has been given to the protests in New Jersey. The Washington Post, in “A 16-year-old takes the PARCC Exam. Here’s Her Disturbing Report,” quotes Marina Ford, a sophomore from Tuckertown, N.J., who said, “These PARCC exams have done nothing but mess with my valuable class time and significantly lower my confidence in my competence as a student. A large majority of my classmates are not taking this exam seriously because it honestly feels like a joke.” 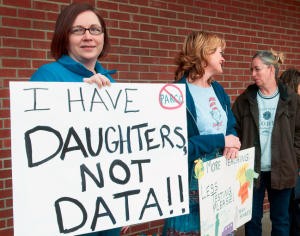 The article “Common Core controversy continues in N.J. and across nation” states “According to a new Gallup Poll, almost two-thirds of Americans had never heard of the Common Core until last year. This year, 60 percent said they opposed them.”

In Illinois, the PARCC testing is still new to schools. Nowak said, “The Illinois State Board of Education adopted PARCC as a state-wide assessment. We are uncertain if this assessment will be a long-term replacement or how long it will be used.”  Despite this, there is hope that it will better help students and benefit schools, proving that it’s not just another test. After the results of the April testing come out, more will be known about how the test will be used to help students and our school.

For more information about the PARCC test, visit www.parcconline.org

Neerali is a senior and as a senior, this is her second year on the Crier. Last year she was the co-editor of the Et Cetera page. She is also involved in BPA, Speech Team, Science Olympiad, and also volunteers at a local hospital. In her spare time, she likes to bake. She believes that you can never watch Pirates of the Carribbean too many times. If she could solve one problem in the world, she would put an end to starvation.