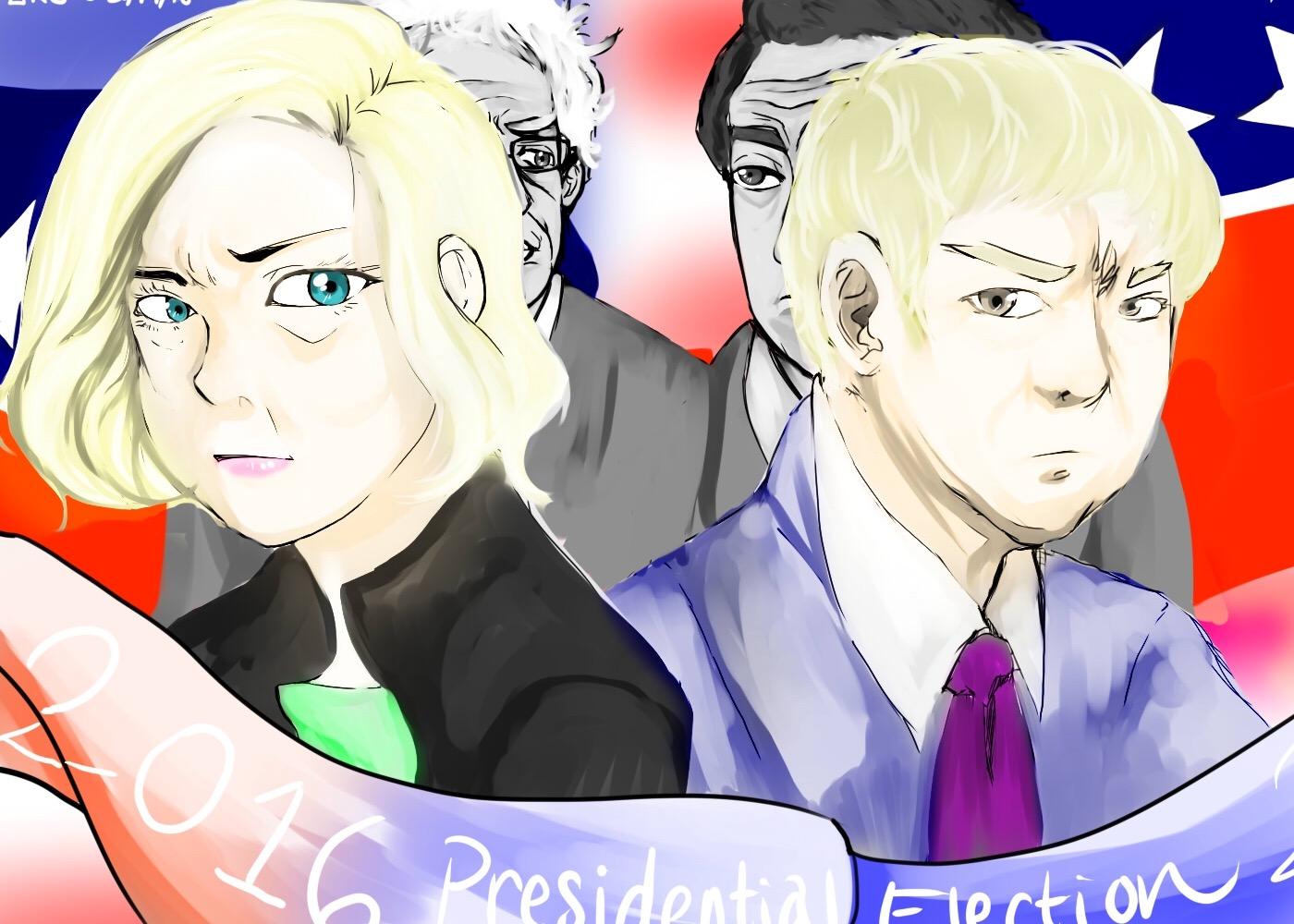 In an era where memes start proliferating the moment something crazy happens, the presidential campaign has become a target. But what’s really going on what the campaign, especially as primaries are beginning? Many people wonder, but they don’t quite understand this long process to find a new leader.

The 2016 presidential campaign: Meet your candidates

What does it mean when a candidate is “winning?” Well, it means that they have high numbers in the polls, which are a part of the process of voting in an election. Before voting, the candidate’s abilities are measured by how many people show up to their events to support them. Now that the primaries have begun, voting has started in certain states. As time continues, we will soon have all of America voting.

The candidates come from two different parties: Democrat and Republican. A Democrat is more liberal and an advocate of democracy. A Republican is more conservative and advocates for a republic rather than a democracy. In the 2016 election, there are two candidates on the Democratic Party, and the Republican Party has seven. So, who are the candidates? 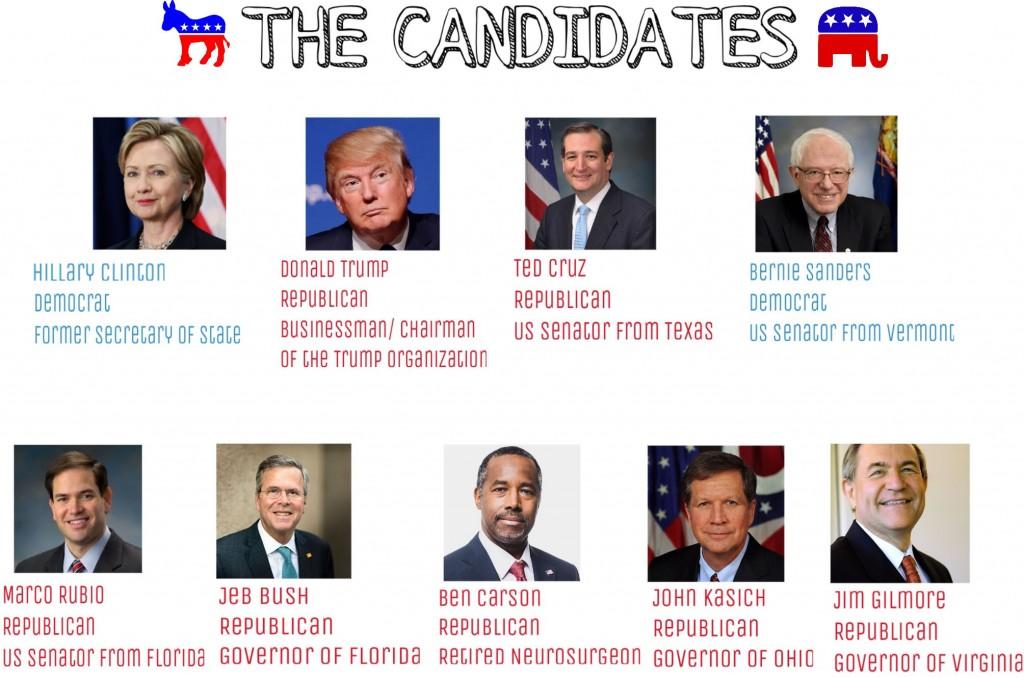 Currently, only two states have voted: Iowa and New Hampshire. The next state to vote on the Democratic side is Nevada, and on the Republican side is South Carolina. Both will take place on February 20. In Iowa, Clinton edged out Sanders by 0.3%; however, Sanders delivered a crushing blow to Clinton by beating her in New Hampshire. Clinton has since bounced back after shining in a one-on-one debate with Sanders last Thursday, February 11. On the Republican side, Cruz won the Iowa caucuses, but Trump made a comeback in New Hampshire by claiming victory. Other candidates, such as John Kasich, Marco Rubio and Jeb Bush are facing new questions regarding their positions, but are surviving.

Caucuses and primaries: What are they?

Prior to a general election, there is a selection process to determine which candidate will appear on the ballot for a given political party in the nationwide general election. Political parties generally hold national conventions at which a group of delegates collectively decide upon which candidate they will run for the presidency. The process of choosing delegates to the national convention is conducted at the state level, which means that there are significant differences state to state and sometimes year to year. The two methods for choosing delegates to the national convention are the caucus and the primary.

Caucuses were the original method for selecting candidates but have decreased in number since the primary was introduced in the early 1900s. In states that hold caucuses, a political party announces the date, time and location of the meeting. Generally any voter registered with the party may attend. At the caucus, delegates are chosen to represent the state’s interests at the national party convention. Prospective delegates are identified as favorable to a specific candidate or uncommitted. After discussion and debate, an informal vote is taken to determine which delegates should be chosen. In the 2016 election, the first caucuses were held in Iowa.

There are two main types of primaries–closed or open–that determine who is eligible to vote in the primary. In a closed primary, a registered voter may vote only in the election for the party with which that voter is affiliated. In an open primary, on the other hand, a registered voter can vote in either primary regardless of party membership. The voter cannot, however, participate in more than one primary. In addition to differences in which voters are eligible to vote in the primary, there are differences in whether the ballot lists candidate or delegate names. The presidential preference primary is a direct vote for a specific candidate. The voter chooses the candidate by name. The second method is more indirect, giving the voter a choice among delegate names rather than candidate names. As in the caucus, delegates voice support for a particular candidate or remain uncommitted. In the primary, one of the most important days in the primary is Super Tuesday, a day in which 15 states hold primary elections. Here are your timelines for the primaries up until Super Tuesday: 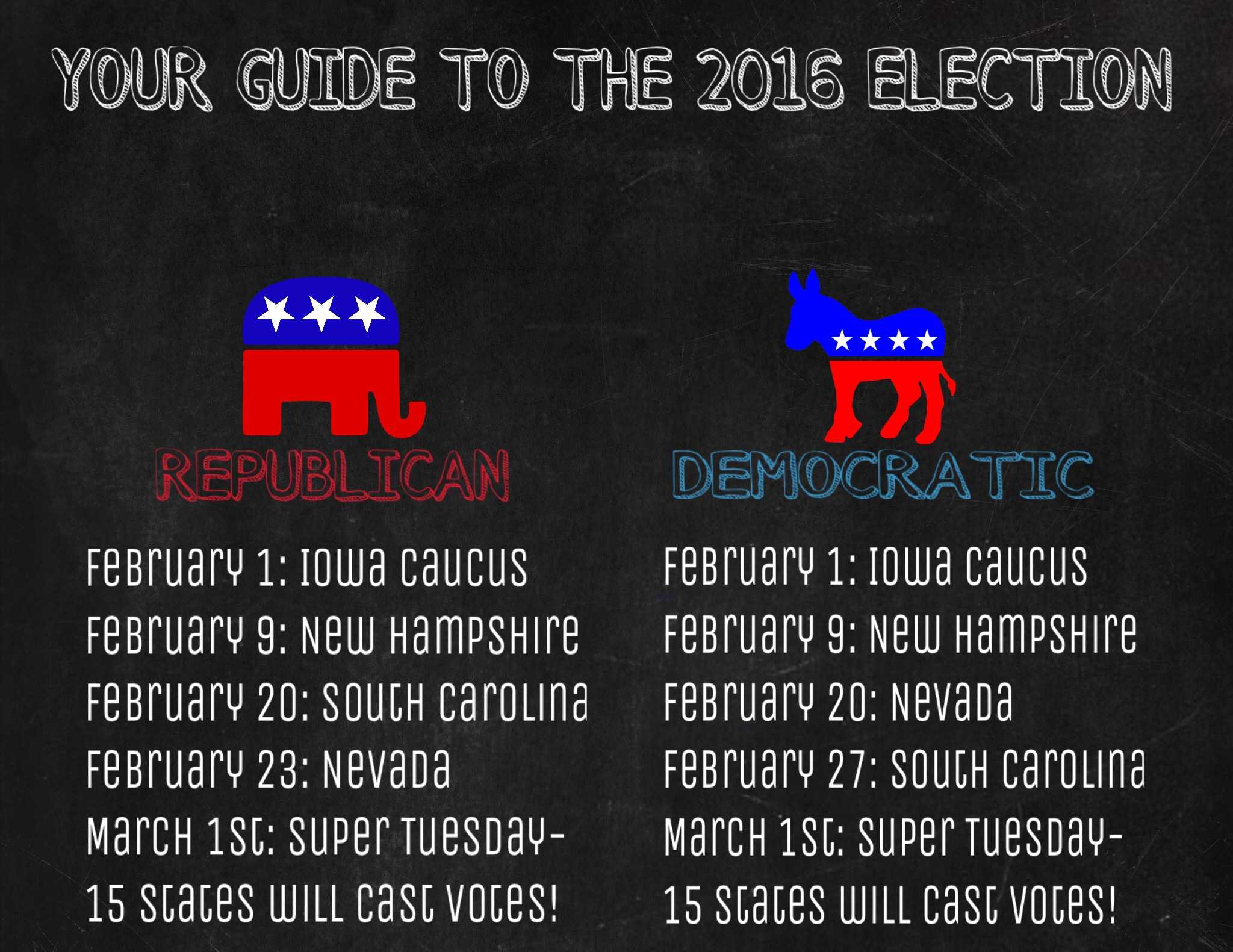 Here are your voting dates until Super Tuesday

What role does Illinois play in the primaries?

This year, Illinois will be voting on March 15. It will be an open primary, meaning people can vote regardless of party membership. Illinois is expected to have 182 delegates at the 2016 Democratic National Convention. Of this total, 156 will be “pledged delegates.” Pledged delegates will be allocated to a candidate in proportion to the votes he or she receives in the state’s primary. A candidate will be eligible to receive a share of the state’s pledged delegates if he or she wins at least 15 percent of the votes cast in the primary. Illinois is expected to have 69 delegates at the 2016 Republican National Convention. Of this total, 54 will be district-level delegates. In the past two election cycles, Illinois has voted Democrat (Barack Obama), and many experts believe Illinois will do the same this cycle, as well. However, there are many conflicting opinions since Donald Trump (Republican) currently tops at 37% in Illinois. 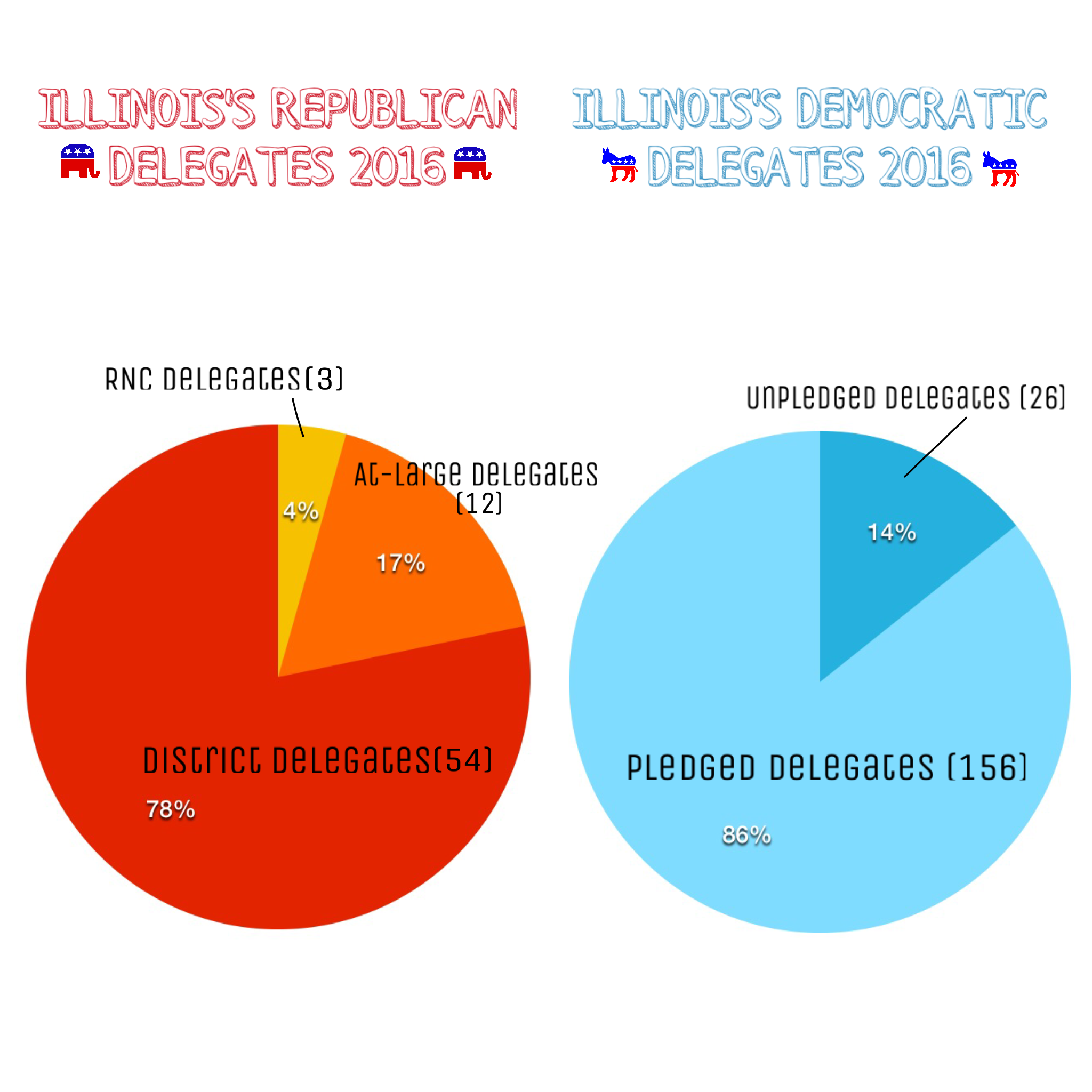 Voting in the primaries is important because it dictates the nominee from each party for the general election. The problem today is that many people don’t know much about voting or the candidates, so they choose not to vote in the first place. Voting is important because it allows citizens to project their voice in who gets to become their next president. Here are some FAQs about voting and their answers:

Let’s see how Conant students are deciding to vote: 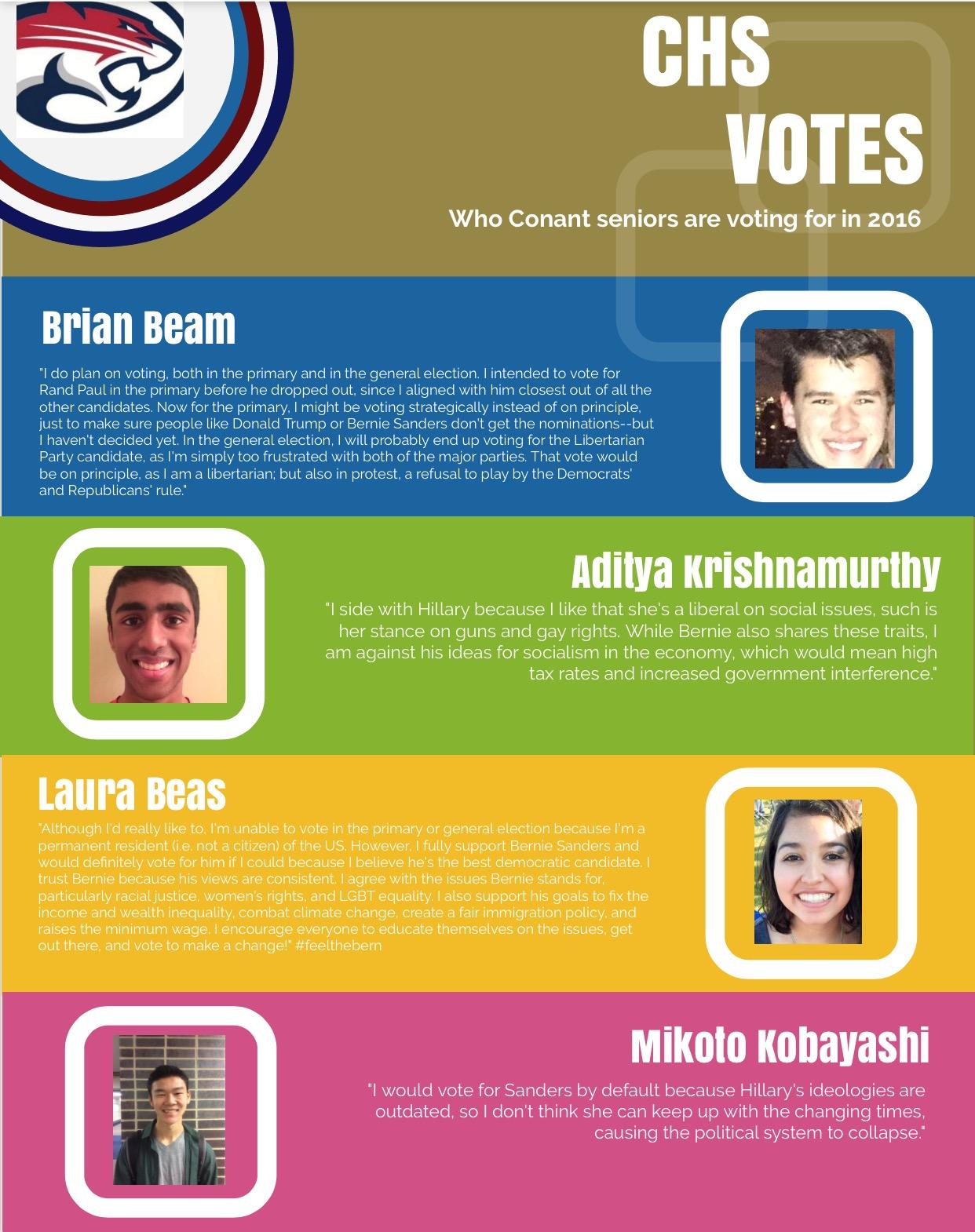 The stakes are higher than ever, and America is a democracy for one reason: to give every citizen a voice. It is time to use that voice to pick the most qualified leader there is.