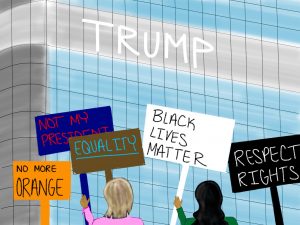 Frustration. Disappointment. Resentment. The astonishment and shock of Donald Trump actually becoming president of the United States soon turned into anger and not longer after, people took action through voicing their opinions with the methods of protests.

Although many of the protests are peaceful, with groups of people gathering and marching through streets demanding respect, some are taking violent turns caused by the dynamic differing of opinions towards Trump’s presidency. Protests broke out all over the country in cities such as Chicago, New York, Portland, and Los Angeles.

While it is imperative for us to voice our opinions, especially towards such a prominent topic, the excess violence involved in the protests is unnecessary. Instead, people should protest peacefully so riots don’t form, turning an idea of togetherness into a hateful movement.

It is our right as American citizens to voice our opinions towards the injustice and hatred that is potentially being created by Trump’s presidency. However, as a group we need to come together to create support and love, not hatred and violence towards others. On Nov. 11, a video came out of a man who had been severely beaten for voting for Trump as bystanders yelled taunts such as, “You voted Trump”, and “Don’t vote Trump.” These types of instances are what we as a nation need to prevent. We cannot let our anger and discernity towards Trump’s presidency fuel into senseless violence because it would not change the outcome of things, but in fact just create a weak nation.

A man was arrested for using force to put an end to a protest, on Nov. 10. According to the Salon website, “A 21-year-old Missourian was arrested on Thursday after allegedly accelerating his truck into a group protesting President-elect Donald Trump on the campus of the University of Central Missouri.” This occurrence serves as an example of the hatred that is sprouting from the both sides of the argument. Instead of singling each other out and grouping ourselves in separate groups, we need to raise awareness of the oppression that is taking place and make prominent the fact that we will take a stand and not let any American face the injustices that are taking place.

We need to find a balance between effective, assertive protests versus illogical violence caused by anger, because violence is not the answer to the fears and worries of our country.  If people believe that their protesting will be effective, they’re allowed to voice their opinions. As their 1st amendment right states, they should proceed with their protest, but the methods of protest the people are using to exert their anger is ineffective and is causing more hatred. If people want their protests to be meaningful and effective, they should protest peacefully.