How to deal with awkward situations 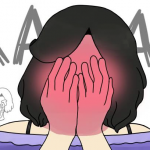 1. Forgetting Someone’s Name
It happens to the best of us. A person will introduce him or herself seconds before, and you’re already drawing a blank. Or even worse, it wasn’t your first time meeting them. While you’re mentally kicking yourself for not remembering, you start to go through all the possibilities. Rather than doing this, you can pretend that you don’t know their last name, and ask them for their full name. Additionally, you can introduce them to a friend and eavesdrop as they introduce themself. But sometimes, it’s better to just fess up, and ask them again. You never know, the other person might have forgotten your name, too.

2. Uncomfortable Conversations
Everyone’s been here before, when you aren’t sure exactly what to say, or you just said something that creates an awkward tension in the air. But it’s okay because there are ways to clear it up. You should first try to understand why it’s awkward and identify where the problem began; it could be because you and the other person have different opinions on something, or you may have said something you shouldn’t have. After that, you can assess what you need to do next, whether it is making a joke or just continuing the conversation. When there is a long break, the awkwardness just grows, so you must keep conversation flowing so everyone feels at ease. By finding humor, you lighten the mood, even if your joke isn’t the best. Additionally, you can ask a question to change the topic, or just start talking about something else and let the conversation flow. But most importantly, if a conversation starts to go somewhere you don’t want it to, steer it in the other direction before you’re sucked in.

3. Owning Up to a Mistake
Everyone makes mistakes, but how you react is what matters. The first step is recognizing what you did was wrong. By doing this, a person isn’t showing weakness, but is actually showing strength and taking ownership for their actions. Also, don’t try to shift the blame onto someone else. Accept that it was your fault. When you actually need to approach the person you let down, do it as soon as possible; the more you procrastinate, the worse it becomes. The first thing you should do is admit that you were wrong. It shows that you are willing to take responsibility for your actions, even though your pride might be damaged. After you set the basics, you must sincerely apologize.

You need to be compassionate towards the other person’s feelings, especially if your mistake hit them hard. Try proposing a solution, and show that you are willing to make things better. You must accept the consequences of your actions, although it may be scary, but this is the best way for you to grow as a person. Reflect on your actions and be accountable. But most importantly, move on. No one is perfect, and you can’t live your life beating yourself up because of that fact.

4. Laughing When You Shouldn’t
The most common response when people don’t understand what another person said is laughing. Never do that. If they said something that was not supposed to be amusing, it could ruin the entire conversation, and then you’ll have to refer to the previous topic about dealing with awkward conversations. But sometimes you just need to laugh. I understand that it’s hard to hold it in, but you can try turning it into a cough or sneeze or distract yourself with something sad and/or scary (I know how cliche these sound, but they sometimes work). Try pinching your arm or biting your cheek, but not too hard–don’t hurt yourself. But really, sometimes you just need to let it go and apologize after.

5. Taking Awkward Situations Too Seriously
I’ll admit, I am guilty of doing this. As I said before, no one’s perfect. But don’t stress about something minor because most likely no one will remember or care. There’s no reason to lose your mind over it. And if you really care that much, make sure it doesn’t happen again, and if it does, remember that almost everything seems a lot worse than it actually is.